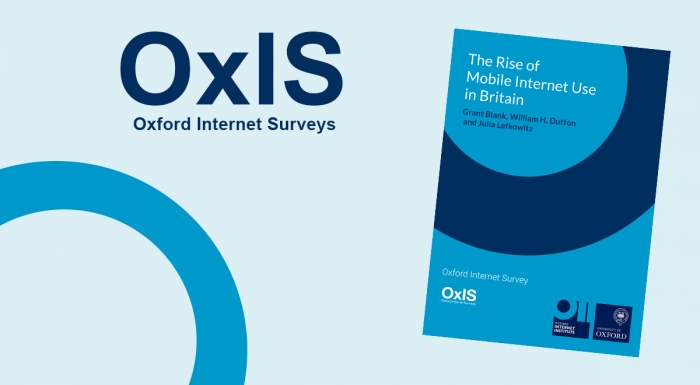 As Britain increasingly becomes a digital society, findings from the latest Oxford Internet Survey (OXIS) report, ‘The Rise of Mobile Internet Use in Britain, co-authored by Dr Grant Blank, Professor William H. Dutton and doctoral candidate Julia Lefkowitz consider the social implications of the rise of mobile Internet use.  In their report, they address the central question of whether mobile-only users are missing out on internet services, compared to other groups.

The Growth of Mobile Internet Use

In the short time from 2013 until 2019 the use of mobile has been the most dramatic change in Britain in how individuals use the Internet. As early as 2003, 74 percent of adults in Britain were using a mobile phone.  Fast forward to the introduction of the smartphone in 2007 and the mobile Internet took off quickly, moving from 40 percent of British adults using smartphones in 2011 to nearly 80 percent (79%) in 2019.

Today many more people use the mobile internet primarily through smartphones, with users able to perform many of the functions previously done almost exclusively on desktop computers and laptops.  However, as mobile use has enabled people to more deeply embed the internet in their daily lives, this diffusion has had major social consequences.  The UK dynamics and consequences of this transformation are starkly illuminated in the Oxford Internet Survey 2019,  with key findings relating to mobile Internet use explored in more detail in the latest OXIS report, ‘The Rise of Mobile Internet Use in Britain’, the key findings of which we highlight here.

Previous scholarship has presented the case that mobile-only use of the Internet is likely to be inferior to computer-based use, especially Napoli and Obar (2014).  However, the research findings presented in the latest OXIS report suggest this may be too strong a claim.  Whilst we find the activity of mobile users is limited compared to those users with both computer and mobile access to the Internet, in certain ways ‘mobile-only’ might well be superior to having access only via a computer, which we call ‘computer-only’ access.

In light of these findings, we pose the question, does mode of access matter? Our research indicates that ‘Next generation users’, as we define those who use three or more devices, some of which are mobile, have the most flexibility in how they use the Internet.  They are best represented by the computer+mobile category of users.  Such dominance in the era of the digital divide, leads us to have concerns about whether computer-only or mobile-only users are disadvantaged, compared to those who have multiple forms of access.  In our new report, we examine those concerns in more detail by looking at patterns of Internet use.

Our research shows that computer+mobile users are likely to access the Internet for a wider range of activities, such as entertainment, shopping, learning, seeking information, social media and producing their own content, doing more in every category of activity studied in the OXIS report. On the contrary, the most disadvantaged people are computer-only users, who were least likely to engage in any of these activities. Mobile-only users are an intermediate group, they do more activities than computer-only users, but less than computer+mobile users.  The disparities between the user groups are highlighted below. 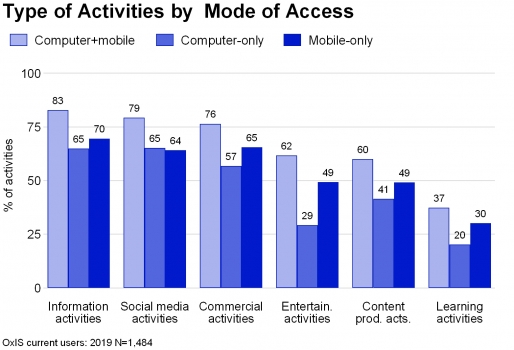 Further analysis shows there are relationships between the demographic characteristics of individuals and modes of access, in particular in relation to age and income. 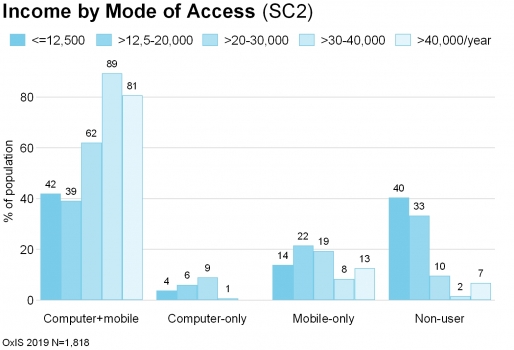 Implications of rise mobile internet use for society

The main effect of the mobile transformation of Britain has been to embed the Internet more closely in everyday lives, enabling more people to use the Internet anywhere at anytime, as computer and mobile devices become complimentary. As internet use becomes an essential aspect of everyday life, Internet users with multiple devices, including mobile devices, are the most embedded and advantaged in Britain, but some people are still left behind.

Can mobile internet use bridge the digital divide?

The rise of mobile has left three groups on the wrong side of the digital divide, non-users, a small proportion of the public that is completely dependent solely on mobile and those who have no mobile access and rely entirely on a computer.   Drawing on the findings from the latest OXIS report, we find that whilst mobile Internet users tend to be more active than computer-only users, the growth in mobile Internet use is a complementary and additional mode of access, rather than a mechanism that is closing the digital divide.