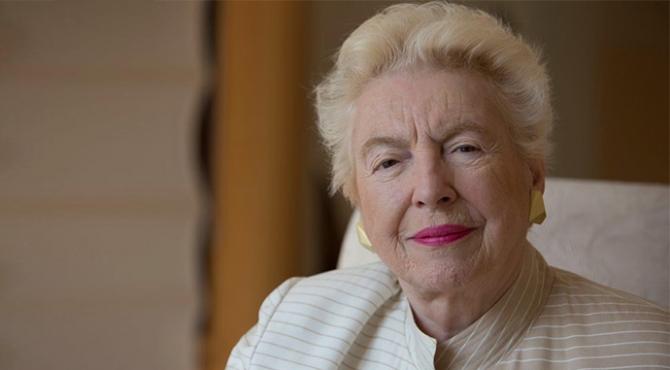 Dame Stephanie arrived in London in 1939 as an unaccompanied Jewish minor fleeing the Nazis. In her autobiography, when referring to the effort people had put into saving her life she writes: ‘a simple resolution took root deep in my heart: I had to make sure that mine was a life worth saving,’

In her extraordinary life she has defied gender stereotypes, founded a pioneering all-female software firm and given more than £67 million to charity. Dame Stephanie started what became Xansa plc (now part of the Sopra Group) on her dining room table with £6 in 1962. In 25 years as its Chief Executive she developed it into a leading business technology group, pioneering new work practices and changing the position of professional women (especially in hi-tech) along the way. Her Dameship in the Millennium honours was for services to IT. She has served on corporate Boards such as Tandem Computers Inc. (1992-7), the John Lewis Partnership plc (1999-2001) and AEA Technology – previously the Atomic Energy Authority (1992-2000).

Her charitable Shirley Foundation made over £67m grants and initiated a number of projects that are pioneering by nature, strategic in impact and significant in money terms. The Foundation’s current activity is targeted at national strategies for autism.

The founding of the OII in 2001 was made possible by the benefaction of Dame Stephanie and The Shirley Foundation. From her deep personal and professional interest in the social and ethical questions raised by the internet’s growth, she recognized the opportunity for the University of Oxford to assume a position of global leadership in this significant field of research.

She was awarded the Order of Companions of Honour in the Queen’s Birthday Honours in June 2017.

To find out more about Dame Stephanie, see her memoir, ‘Let It Go’.