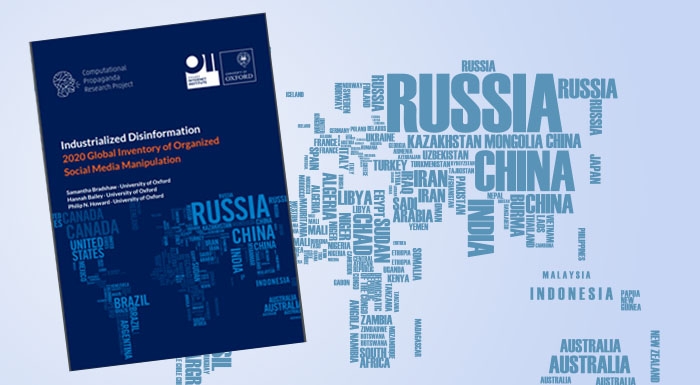 The report reveals that organized social media manipulation campaigns operate in 81 countries, up from 70 countries in 2019, with global misinformation being produced on an industrial scale by major governments, public relations firms and political parties. It describes how disinformation has become a common strategy of cyber manipulation, with more than 76 of the 81 countries deploying disinformation as part of political communication.

Professor Philip Howard, Director of the Oxford Internet Institute, and the report’s co-author says: “Our report shows misinformation has become more professionalised and is now produced on an industrial scale.  Now more than ever, the public needs to be able to rely on trustworthy information about government policy and activity. Social media companies need to raise their game by increasing their efforts to flag misinformation and close fake accounts without the need for government intervention, so the public has access to high-quality information.”

The OII team says the level of social media manipulation has soared since 2019, with governments and political parties spending millions on private sector ‘cyber troops’, who drown out other voices on social media. Such professional cyber troops have also used citizen influencers to spread manipulated messages. These include volunteers, youth groups and civil society organisations, who support their ideologies.

OII alumna, Dr Samantha Bradshaw, the report’s lead author says, “Our 2020 report highlights the way in which government agencies, political parties and private firms continue to use social media to spread political propaganda, polluting the digital information ecosystem and suppressing freedom of speech and freedom of the press.  A large part of this activity has become professionalized, with private firms offering disinformation-for-hire services.”

Cyber troops are frequently directly linked to state agencies, according to the report, “In 62 countries, we found evidence of a government agency using computational propaganda to shape public attitudes.”

According to the report, “In 61 countries, we found evidence of political parties or politicians running for office who have used the tools and techniques of computational propaganda as part of their political campaigns. Indeed, social media has become a critical component of digital campaigning.”

Dr Bradshaw adds: “Cyber troop activity can look different in democracies compared to authoritarian regimes. Electoral authorities need to consider the broader ecosystem of disinformation and computational propaganda, including private firms and paid influencers, who are increasingly prominent actors in this space.”

Oxford University has been placed number 1 in the Times Higher Education World University Rankings for the fifth year running, and at the heart of this success is our ground-breaking research and innovation. Oxford is world-famous for research excellence and home to some of the most talented people from across the globe. Our work helps the lives of millions, solving real-world problems through a huge network of partnerships and collaborations. The breadth and interdisciplinary nature of our research sparks imaginative and inventive insights and solutions.