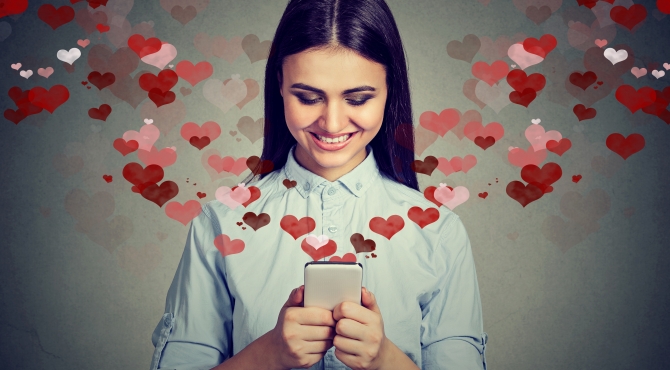 When it comes to online dating, singles only have the capacity to effectively communicate with around seven new people per week, even though they might have access to hundreds of potential ‘matches’.

This is according to a new study from the Oxford Internet Institute, University of Oxford in collaboration with eharmony, which tracked changing preferences and communication patterns among single Brits over the past decade.

In line with Dunbar’s number – the theory that there is a limit to the number of people with whom one can maintain stable friendships – researchers found that 95% of users send requests to 12 new people at most per week, and reply to less than seven. This suggests that people feel they also have a maximum communication limit when looking for a meaningful relationship.

Commenting on the findings, Professor of Computational Social Science Taha Yasseri said, “Though it may be expected that people who online date would possess a ‘more is more’ approach in their search for a partner, the opposite is true. In the study, singles were actually fairly restrictive in the number of people that they communicated with at any one time. This may indicate that they are more invested in their search for a truly compatible partner.”

Patrick Gildersleve, a researcher on the study, added, “We were motivated by research on the cognitive limit on the number of social connections humans can maintain, and investigate whether there is an analogue for humans when considering romantic relationships. Whilst strategies might vary across more casual dating platforms, users on eharmony are particularly invested in finding a long term romantic partner, so we are confident that these findings are applicable to non-casual courtship behaviour in general.”

In line with this, researchers also found that more attractive users tend to be the most complacent, initiating less conversation as they increasingly gain confidence in their ability to attract interest.  On average, the most (self-rated) attractive 25% of people are 16% less likely to initiate a conversation, and 33% less likely to respond to a message than the average person.

Furthermore, female subscribers who prove popular on the dating platform are significantly more selective about how many messages they respond to.

This research was conducted using advanced statistical methods on data of over 1 million matches between eharmony users. Filters were applied to the data to ensure that only active users were studied. The ‘dating capacity’ for each eharmony user, or the rate at which they engage with potential new partners, was calculated by taking their average time between initiating / responding to messages. The distributions of these features, and the different quantiles, over all users were then examined. Attractiveness measures were defined by the fraction of potential partners that initiate contact with or respond to messages from a target user, having viewed their profile. Similarly, selectivity measures were defined by the fraction of potential partners that that a target user initiated contact with, having viewed their profile, or the fraction of messages received that a target user responds to. Pearson correlations between measures of the rates of initiation and response, selectivity, and attractiveness were calculated to elucidate the relationships between activity, pickiness, and success in online dating.