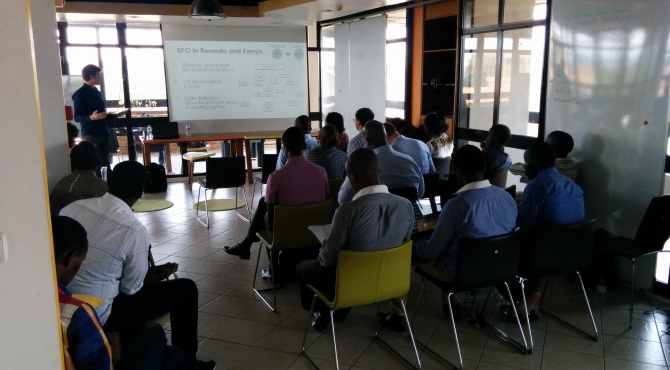 This is the final of a three-part series that summarizes recent outreach meetings in Rwanda for our ESRC/DFID-funded project on changing Internet connectivity in East Africa (part 1; part 2).

In this article, Nicolas Friederici discusses the outcomes of the meeting for the business process outsourcing sector. We thank kLab for hosting our workshop in Kigali, Claude Migisha K (ICT4D consultant) for local facilitation, and our participants for an insightful and active discussion. 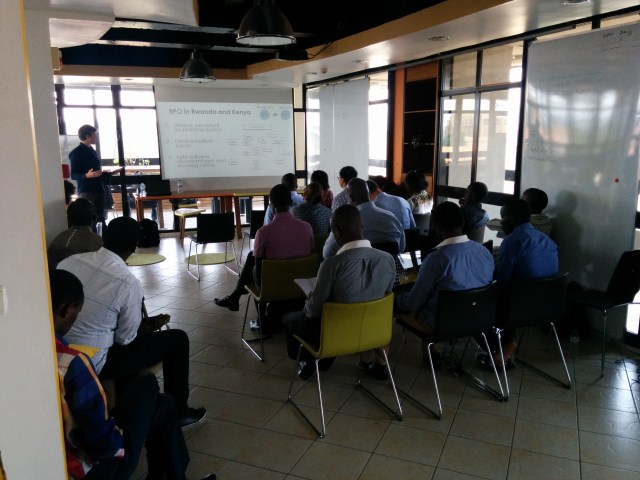 When we think about business process outsourcing (BPO), we think about tens or hundreds of “knowledge workers” with headsets on, or keyboards in front of them, sitting in cubicles or at long lines of connected computers and phones. We think about call and contact centers, or of software development houses. In a way, we imagine these places to be the modern equivalent of factories and assembly lines, synonymous with efficiency of scale, division of labor, and mass production—and mass employment. As we thought of inputs and outputs as physical materials in the industrial age, we now think of information, knowledge, and digital goods that are produced and exchanged through BPO.

As a near friction-less transporter of digitized information, Internet connectivity is seen as a leveler of the global geographical playing field for BPO. Accordingly, developing countries find the concept of BPO sectors as employment generators within local knowledge economies an appealing idea: BPO work is mostly commoditized and does not require high levels of skill, and so BPO customers in developed countries should pick the BPO suppliers that offer the lowest cost of labor, no matter where on the planet those are located. And for some places, there has been some truth to this hypothesis: countries like India and the Philippines are often referenced as nations where BPO and digital mass production for customers in the US and Europe have resulted in large-scale economic activity and job creation (an argument which other OII colleagues will further explore over the coming months).

Rwanda and Kenya were two countries that wanted to be the African equivalent of India, and use BPO as a job creator and platform for an emerging ICT-adept workforce. Through a three-year in-depth research project based on discourse analysis of media and policy documents and over 100 interviews with people from the two countries’ BPO sectors, an OII project implemented by Mark Graham and Laura Mann has investigated the hopes and realities of BPO in East Africa.

A workshop we held in August at kLab in Kigali marked the closing of the project. We wanted to corroborate our findings and present our recommendations to an audience that mainly consisted of Rwanda’s BPO professionals. In this post, I won’t go into the details of a comprehensive report that we will publish shortly on this website; a preliminary executive summary and slides are already available. Instead, I will share an overview of the feedback we received. Mostly, it confirmed what we had already written up, but our workshop participants helped us make a few additions and further nuance some of our findings.

In a nutshell, our discussion found that the realities of local BPO companies were much more complex than the simple proposition that the Internet lets low-income countries seamlessly tap into global demand for BPO services. In fact, given the many obstacles that our participants pointed out, it wasn’t all too surprising when ultimately some told us that actually there still is not much of a Rwandan BPO sector to speak of, and that mass employment in this field remains elusive. Clearly, the country’s improved Internet connectivity had not single-handedly catalyzed local BPO business.

We highlight three important factors that the group identified as necessary to be in place in addition to Internet connectivity for a local BPO industry to emerge.

Skill Gaps on Many Levels

A crucial outcome of the group conversation was that our report needed to further emphasize the role of skills for BPO, and that “skills” come in a greater variety than one would imagine. The practitioners described how the policy and media rhetoric, but also managers themselves, often underestimated that even for “low-skilled” BPO jobs workers in fact need a whole set of competencies. It was to be expected that certain technical skills (especially in software development) would not always be on par with levels common, say, in Europe, but also the soft skills, attitudes, and work ethic of BPO workers turned out to matter.

For instance, Rwandan workers are diligent and reliable, motivated by the common cause to rebuild the country, but some of the participants complained that they also often missed time and task management skills. Software developers were described to have sufficient coding skills, but lack broader management and contextual knowledge; they are “coders but not software engineers.” The people in the room thus agreed that, going forward, it would be essential for BPO businesses to learn about the skill levels of Rwandan workers, and how they affect the value that can be extracted and created. One participant made a pithy remark, saying that “human capital is the key asset” for his business, and Internet connectivity alone thus wouldn’t enable him to thrive.

The conclusion of this part of the discussion put the burden mostly on higher education institutions that were seen to miss equipping workers with skillsets that would be relevant in the (BPO) workplace. The gaps implied that BPO providers had to train their employees themselves, adding to their cost. This, in turn, led several of the workshop participants to argue in favor of government subsidies for trainings. Another idea was that trainings could be offered in partnerships between education institutions, private training companies, and BPO providers, so that “theoretical knowledge” could be combined with work experience and development of a work ethic.

Another finding in the category “reality is more complex than the BPO vision” came out of our participants’ descriptions of BPO subsectors. For instance, in Rwanda, software development is subject to very different skill gaps and market demands compared to data entry and call centers. This affects the competitiveness of Rwandan businesses, irrespective of their cost advantage: while the per-hour wage for a software developer is lower in Rwanda compared to most other countries, the limited quality and project scale that Rwandan BPO firms can deliver 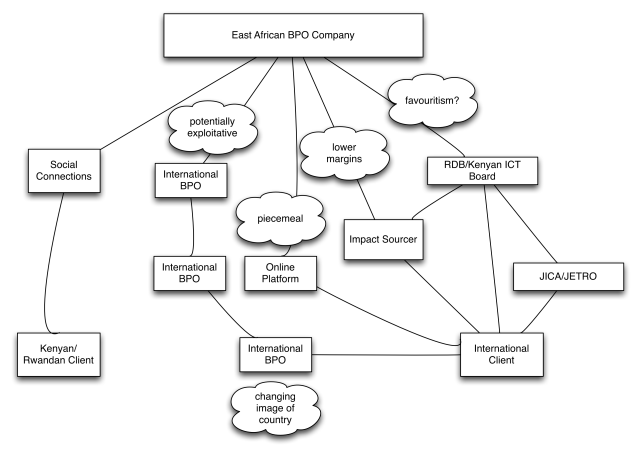 still precludes them from accepting well-paid deals. For example, a participant mentioned that kLab receives 7-10 requests per month from companies from outside of Rwanda that seek software development outsourcing, but the tech hub is not always able to match these customers with local BPO suppliers.

As for skills, our participants outlined how local BPO suppliers and customers (which included government agencies) lacked a good understanding of such more complex BPO market dynamics. In the eyes of our participants, managers in the past suffered from a “gold rush” mentality, while branches of government (apart from those agencies actually dealing with ICT) had yet to grasp the potential of BPO to improve their services, for instance, in the context of digitization of documents and processes.

Social Connectivity and a Narrow Market for Local Businesses

Other points brought forward were in line with what we had found earlier, but the group highlighted a few opportunities of how the Rwandan BPO sector could be brought forward. For instance, social connectivity and a better understanding of the BPO sector could both be improved if the government, industry associations, or development organizations hosted focused workshops, conferences, and other gatherings. Bringing together BPO providers and customers from the domestic and international markets for face-to-face meetings was seen as an essential requirement for more transnational BPO deals to be struck and for learning to happen.

Another interesting proposition was to learn from South Africa, where the government had set up a BPO fund, but because of a narrow understanding of “BPO” and management problems, the fund had not had the desired impact. In other words, incentivizing local BPO sectors can be a good strategy to bolster an industry, but policymakers and funders need to be shrewd and carefully evaluate market bottlenecks and opportunities for local companies when designing investment instruments. Smaller local BPO businesses also felt that they were disadvantaged by rigid tendering requirements for big contracts from government and corporations. Often, the space for Rwandan companies was more in the small projects, while the larger ones would still be snatched up by Indian competitors.