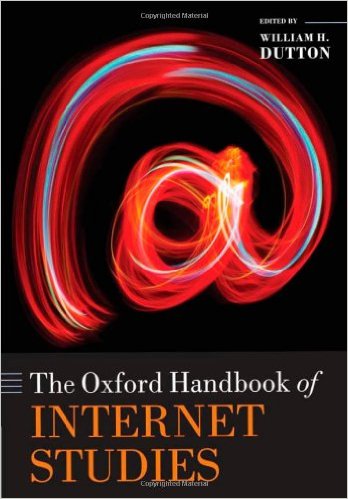 Internet Studies has been one of the most dynamic and rapidly expanding interdisciplinary fields to emerge over the last decade. The Oxford Handbook of Internet Studies has been designed to provide a valuable resource for academics and students in this area, bringing together leading scholarly perspectives on how the Internet has been studied and how the research agenda should be pursued in the future. The Handbook aims to focus on Internet Studies as an emerging field, each chapter seeking to provide a synthesis and critical assessment of the research in a particular area. Topics covered include social perspectives on the technology of the Internet, its role in everyday life and work, implications for communication, power, and influence, and the governance and regulation of the Internet.

The Handbook is a landmark in this new interdisciplinary field, not only helping to strengthen research on the key questions, but also shape research, policy, and practice across many disciplines that are finding the Internet and its political, economic, cultural, and other societal implications increasingly central to their own key areas of inquiry.

Readership: Academics, researchers, and graduate students in Internet Studies, Communication Studies, and across the Social Sciences with an interest in the Internet.

The book is edited by William H. Dutton, Professor of Internet Studies at the Oxford Internet Institute, University of Oxford, and Fellow of Balliol College. Before coming to Oxford in 2002, Bill was a Professor in the Annenberg School for Communication at the University of Southern California, where he continues an affiliation as Emeritus Professor. In the UK, Bill was a Fulbright Scholar, then National Director of the UK’s Programme on Information and Communication Technologies (PICT), and founding director of the OII during its first decade (2002-2011), for which he was awarded a lifetime achievement award. He has authored or edited a number of influential books on the social dynamics of the Internet and related information and communication technologies, including Society on the Line (OUP 1999).