Kathryn has been a Research Fellow in Digital Humanities at the Oxford Internet Institute since 2008, and a Senior Research Fellow at Pembroke College since 2015. Her research interests lie primarily in the Digital Humanities, ranging from the re-organisation of cultural heritage and higher education in the digital world and the impact of new technologies on Humanities scholarship and scholarly communication, to broader debates surrounding the human and social aspects of innovation and technological change. As the University’s first Digital Humanities Champion, Kathryn was responsible for the Digital Humanities Programme at The Oxford Research Centre for the Humanities (TORCH) from 2014-7, including the 2015-16 TORCH Headline series Humanities and the Digital Age.  Her current work focuses on the ways in which museums and cultural heritage organisations can implement new tools and technologies to enhance visitor engagement, and to better understand how visitors engage with collections.

Kathryn currently holds a Knowledge Exchange Fellowship at TORCH (2018-19) where she leads the Hashtag Heritage project, working with English Heritage to pilot the use of social media data to understand engagement with free-to-access heritage sites. She is PI of the Playful Spaces project, which also uses social media to map and better understand playful engagement with Oxford’s museums. Kathryn is also a Research Affiliate at the Pitt Rivers Museum (2018-) where she leads the Open Cabinet project, exploring the use of augmented reality to engage visitors and students with objects in the collections. This work builds on the Cabinet project, which Kathryn has led since 2015, developing an interactive, mobile-optimised digital platform to support and encourage object-based learning. The Cabinet project is a collaboration between the OII, the Oxford University Museums and the University’s IT Services with support from the GLAM Digital Strategy Group. Cabinet builds on research developed during Kathryn’s AHRC Early Career Fellowship (2012-3), which examined the role and impact of crowdsourcing in the arts. This research project focused on the potential of new information and communication technologies to promote public engagement with and awareness of museum collections, and to elicit new information about users and usage, including formal and informal learning.

Kathryn has longstanding interests in gender, identity and social change, the subject of her doctoral work in modern British history. As part of the Semantic Map of Sexism  and Offensive Internet projects, she has collaborated with Dr Taha Yasseri to understand how and where sexism is experienced, the interplay between constructions of sexism in both public and private spaces, and how cultures of offensive speech proliferate online.

Kathryn joined the OII in 2008 to work on the Digitised Resources: A Usage and Impact Study with Professor Eric Meyer, the first of a series of JISC-funded projects on usage and impact, leading to the creation of a free web resource, the Toolkit for the Impact of Digitised Scholarly Resources. She subsequently completed research in the field of Digital Humanities for the Oxford e-Social Science (OeSS) project, and probed the role of e-Infrastructures in the creation of global virtual research communities as part of the eResearch2020 project. Her work has been funded by the AHRC, Google, JISC, and by the University of Oxford’s IT Innovation Fund, John Fell Fund, ESRC IAA Fund, Van Houten fund, and Returning Carers Scheme.

Kathryn completed her DPhil in Modern History at the University of Oxford in 2007.

The Digital Wonder Cabinet at the Ashmolean Museum’s LiveFriday event 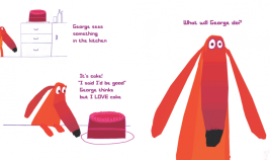 What will George Do?