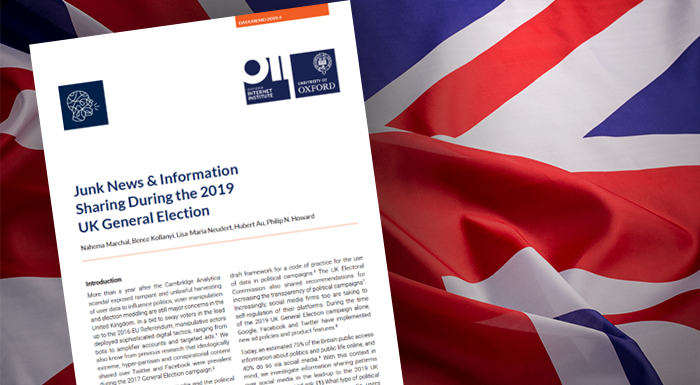 In a fresh analysis of the state of ‘disinformation’ in the run-up to the 2019 UK General Election, researchers at the Oxford Internet Institute (OII), University of Oxford have found overall levels of ‘junk news’ circulating in the run-up to the 2019 election are relatively low. Junk news sites posted an average of 9.6 stories per day compared to 38.2 stories per day from major news organisations.

While junk news sites were less prolific publishers than mainstream outlets during the campaign, their stories tended to be more visual and were more likely to be shared on Facebook than an average story from an established news brand.

The University of Oxford team also found 40% of junk news posts on Facebook provoked extreme reactions from users, with users expressing laughter or anger by using the reaction button at the bottom of the posts to express their feelings, clicking the ‘haha’ button or ‘angry’ button accordingly.

“During the 2017 General Election campaign, we found that ‘junk news’ was much more prominent, but this time around that doesn’t seem to be the case. Our findings show a decline in the amount of junk news circulating over Twitter, with users more likely to share information from a trusted mainstream source than a junk news source.

“This pattern of behaviour echoes the findings from our earlier study of junk news and the European Parliamentary elections, where we also found a decline in the amount of junk news being shared on social media, which is a very encouraging trend”.

Sharing articles from mainstream media was much popular on Twitter than sharing junk news articles, with links to major news brands constituting 33% of shared links, tabloids 12%, local news outlets 7%, and new media/start-up media 8% of shared links on Twitter during the sample period.

Links to political parties, expert and government websites constituted 16% of shared links. Content from civil society groups was also widely shared, with one in ten links shared over Twitter directing users to a third-party source such as a non-profit organisation website.

“What’s interesting to note from our analysis is that the most viral stories from junk news sites do not peddle misinformation as such,” added Nahema Marchal, co-author of the report and a researcher at the OII “but often spin the truth in an attempt to discredit the mainstream and established media.”

The Oxford researchers found the most popular junk news stories shared across UK Facebook pages were distorted versions of news stories originating from mainstream ‘professional’ news sources, with over a third of those analysed referring to the mainstream media and political journalists in their headlines. In three quarters of the stories analysed, this was combined with accusations of wrongdoing, bias or lying. For example, accusations of the BBC ‘siding’ with Prime Minister Boris Johnson following their decision to edit the audience laughter from a clip of the Question Time leaders’ debate.

In contrast less than a fifth of junk news stories focused on the parties’ agendas and proposed policies with two notable exceptions: the widely circulated video of the Prime Minister’s proposal to toughen up Britain’s immigration laws going viral, and the video condemning the Home Secretary for absolving the Government of responsibility for mounting levels of poverty which was one of the top performers in terms of user interactions on Facebook.

The report entitled ‘Junk News & Information Sharing During the 2019 UK General Election’ is published by the Computational Propaganda Project, at the Oxford Internet Institute, part of the University of Oxford. The research team examined 1.76 million tweets related to the UK General Election from 284,265 unique users over a seven-day period, November 13th- 19th. From this sample, they extracted 308,793 tweets containing a URL link, with a total of 28,532 unique URLs analysed. The team also analysed the volume of Facebook interactions with xx junk news and professional news outlets during the first three weeks of the campaign, between November 6th-27th and conducted a thematic analysis of the most popular junk news stories. Junk news was classified as sources publishing deliberately misleading, deceptive or incorrect information, typically in an ideologically extreme, hyper-partisan or conspiratorial fashion, and meeting a variety of criteria related to professionalism, style, credibility, bias, and counterfeiting.