Wikipedia is great! There is no doubt about it. You may argue that it’s not reliable, it’s incomplete, it’s biased, etc, and I might agree. However, despite all these issues, Wikipedia IS useful, fast, practical and phenomenal!

Do you have any other example of a mass collaboration at the scale of Wikipedia with more 40 million editors, having produced more than 37 million articles in more than 280 languages?

Coordinating a small group of friends becomes a big issue when it’s about collaboration and reaching agreement on some topic, how is that possible that this huge number of unprofessional individuals with different backgrounds, cultures, opinions, come together and produce the largest encyclopaedia of all times?

Well, the answer is: it’s not easy and it’s not always smooth. Many Wikipedia articles are about neutral topic, like watermelon and hamsters. But there are lots of editorial wars and opinion clashes happening behind the scenes of Wikipedia as well. What are the main characteristics of these wars? What are the most disputed articles? Does it give us a window to how humans of different parts of the world think about stuff? It’s not difficult to observe some of the editorial wars in English Wikipedia, for example see the list of controversial issues in Wikipedia. But first of all there is no guarantee that these lists are inclusive, and more importantly, such lists are only available for the biggest language editions like English Wikipedia.

We have developed our tools to locate, quantify, and rank the most controversial articles in different language editions without being able to read the language! Our method to measure editorial wars has been reported in our previous papers on Dynamics of conflicts in Wikipedia and Edit wars in Wikipedia.

Now that we have measures of controversy for all the articles in the language editions under study, we could have lots of fun!

First take a look at the awesome post by Mark on mapping conflict and geographical locations of the controversial articles, and then I’ll tell you something about most debated topics in different language editions.

Here’s the top-10 list of most controversial articles in different languages:

Interesting and familiar titles, right? Did you realise that some titles appear in many different language editions? Many of them are about religion: Jesus; countries: Israel, Brazil; politics: Ségolène Royal, George W. Bush. 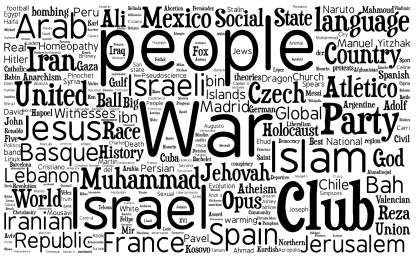 If you’d  like to take a look at the top-100 or in case you fancy having the complete lists with controversy score, get them from here.

What you see at the right is  a Word Cloud of all the titles in top-100 lists.

There are interesting patterns. Similarities and differences. International and global issues and very local items. An interactive visualization of top-100 lists in different languages to show overlaps and similarities, is waiting for you here.

To have a more general picture, we would have to look further than just “titles”. We need to consider more general topics and concepts, which the articles  can be categorised based on.

We hand-coded all the articles in top-100 lists with 10 different category tags. See the population of topical categories in each language in the interactive chart below (click on it!). 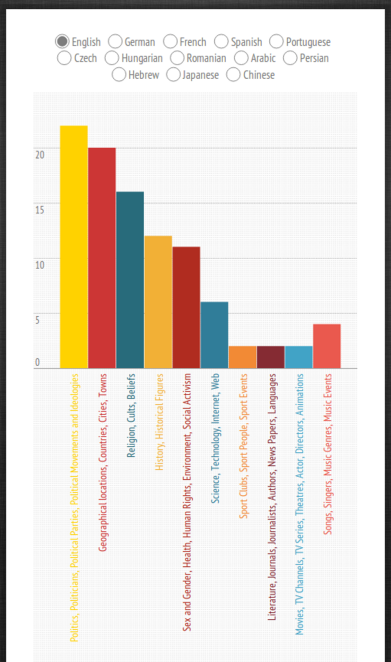 Some interesting patterns: Religion and Politics are debated in Persian, Arabic, and Hebrew even more than the others.  Spanish and Portuguese Wikipedias are full of wars on football clubs. French and Czech Wikipedias have relatively more disputed articles on science and technology related topics. Chinese and Japanese Wikipedia are battle fields for manga, anime, TV series, and entertainment fans. TVB product appear quite often in the Chinese list, and well, the number 19 most disputed article in Japanese Wikipedia is “Penis”!

“So What?” is probably what you are asking. Generally speaking the implication of these kind of studies are two-fold:

1) These results could help Wikipedia and similar projects (which are already many, and growing) to be better designed, considering these experiences and the observations we made. Local effects shouldn’t be neglected and specially Wikipedias with smaller community of editors could be inefficiently very much focused on local issues.

2) we believe that this kind of case-studies (Wikipedia being the case) could help us and social scientist to understand more about human societies. Topics like conflict emergence, its dynamics, its universal features, and the resolution mechanisms could be  empirically examined for the first time.  Most of the theories in social science could have never been tested against real world experiments (in contrast to natural sciences). But now, thanks to our digital life of today, we are able to track and analyse all the actions and interactions of a huge society of individuals (here, Wikipedia editors), so why not test the pre-existing social theories in a large “social experiment” of Wikipedia?

Read more about this project:

And more on Wikipedia by our team: