This is the whole content of the first revision of Wikipedia article on Sandy Hook Elementary School shooting. The tragedy happened at around 9.35 am in local time and this first version of coverage was written in English Wikipedia only 210 minutes after the tragic event. And of course other language editions started to cover the story consequently and after 8 hours, 14 language editions already had the corresponding article, though in some editions very briefly.

In the Figure below, a diagram shows the growth and spread of the story in Wikipedias, in the sense of number of language editions with a coverage, versus the time elapsed since the start of the event. It compares very well with the coverage of the previous significant massacre in Aurora, back in July 2012. Despite all the differences between these two events, such as time of the day, place and demography of victims, etc, the growth of the Wikipedia coverage happens qualitatively in the same way: Within a short period of around 8 hours, around 15 “early adopters” will have an article and this number exceeds 30 in less than 48 hours.  In both cases, language editions like English, Spanish, Swedish, Finnish, Polish and French have the fastest reaction (see the bars at the margins of the Figure). 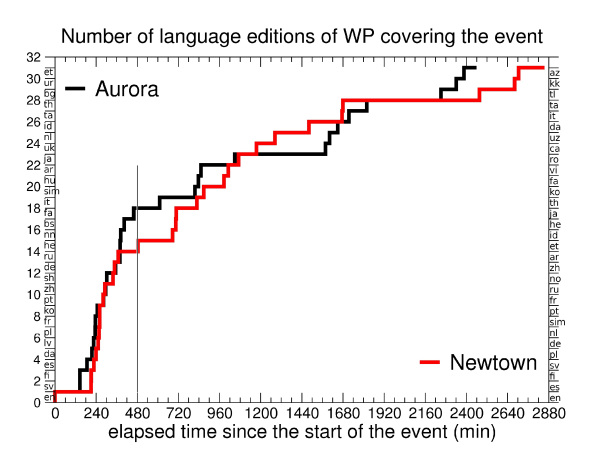 In contrast to this similarity, a big difference is observed in the length of articles for the two events. In the next Figure, the length of the corresponding articles in English Wikipedia is plotted against the elapsed time (curves are smoothed within a window of 20 edits). After a similarly growing phase of 12 hours, the article of the School Shooting continues to grow more than twice, compared to the Cinema Shooting article. 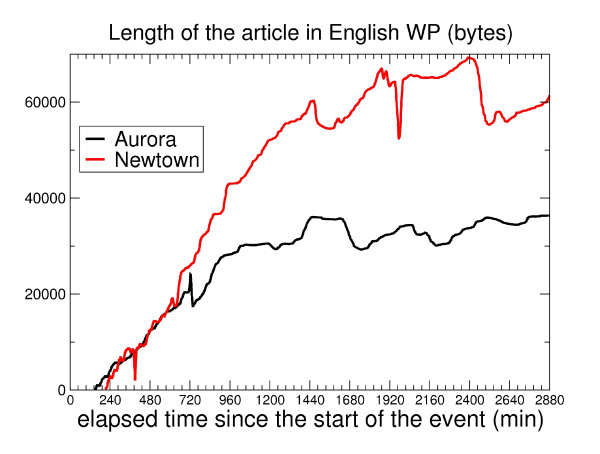 The article of the Newtown event is not only longer but also has got more edits compared to the Aurora article; 2600 vs. 1900 edits within the first 48 hours.

There could be many reasons for this dissimilarity such as the different emotional atmosphere, the number of casualties, and the presence of contradictory stories about the Newtown event in other Media and therefore the need to a more detailed coverage in the Encyclopedia.

I hope we do not get a chance to have more examples of such stories to be able to perform a systematic study (there are currently around 70 articles in the category of Massacres in the United States, many of them happened before the launch of Wikipedia), however, focusing on a sample of naturally similar events (e.g. earthquakes or other kind of natural disasters) with detailed analysis, could open new windows towards a better understanding of the mechanisms behind news spread and information diffusion.

P.S.: The results presented here could be partially inaccurate due to many technical reasons and should be considered in the context of popular science.

P.S.3: Brian has a brilliant detailed analysis of the coverage in English Wikipedia.