Skip down to main content
Published on
27 Feb 2019
Written by
Dr. Sarah Griffin

Mid-way through my doctoral studies in medieval art history, while researching northern-Italian diagrams and calendars, I came across a curious object on Sotheby’s website: a large astronomical calendar wheel made up of three movable disks, which as they turned showed the changing phases of the moon. Reading on, I learned the Wheel was most likely made in the Basilica of San Zeno in Verona around the mid-fifteenth century, earning its often used title: the ‘San Zeno Wheel’. 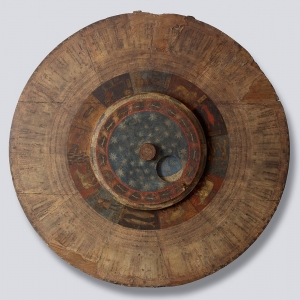 I’d seen smaller versions of this type of instrument in manuscripts and on portable scientific instruments before (below), but two things struck me about this object. 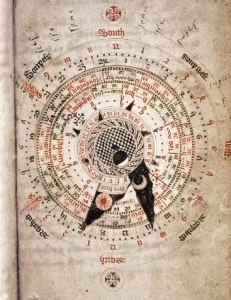 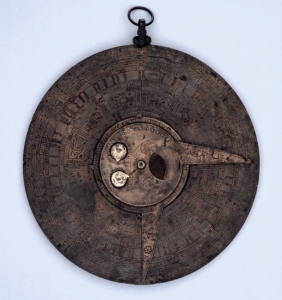 From then on, I was hooked. I had to find out how it could have been used back in fifteenth-century Verona, and whether any other instruments existed like it. My first step was to see the Wheel in the flesh, which was made possible by a grant from the Scientific Instrument Society. I went to visit it at the Map & Atlas Museum of La Jolla (San Diego) in August 2016, where it currently resides. Having travelled far to see it, I had just a few hours to record as much information as I physically could, a task made particularly difficult by its size and the amount of faded textual and numerical information on the Wheel’s vellum. In addition to a few sketches, I used my phone to take as many images as possible in the remaining time – which turned out to be just under 150. Back in Oxford and with a bit of help from the Cabinet Project’s Jamie Cameron, I inserted these into AgiSoft Photoscan – software that performs photogrammetric processing of images– to make a three-dimensional model. After creating an entry for the San Zeno Wheel on Cabinet to host the model, I made annotations that labelled each column of the calendar. 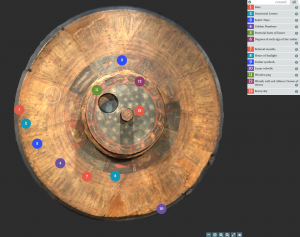 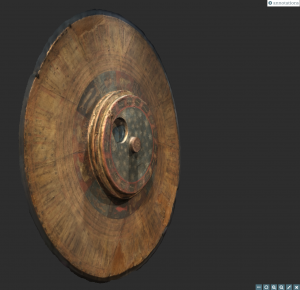 Not only is the three-dimensional model absolutely essential to understand how the three disks are stacked upon one another, but the annotations provide the clearest and quickest way to explain the complex content of the astronomical calendar. I presented the annotated model at conferences, to my students, and informally whilst chatting to colleagues, to give them a sense of the three-dimensionality and scale of the object that a photograph wouldn’t have been able to deliver.

As a DPhil student, Cabinet provided me with the ideal platform by which to share my research in a visually engaging way, and I’m delighted to say that the San Zeno Wheel model is now publicly available. I now work with Cabinet as a Research Assistant, to make sure that students and staff are aware of the platform and the potential it has for the communication of their research and teaching.

The outcomes of this research can be found in S. M. Griffin, ‘Synchronising the Hours: A fifteenth-century wooden volvelle from the Basilica of San Zeno, Verona,’  Journal of the Warburg and Courtauld Institutes, LXXXI (2018), pp. 31-67. Special thanks go to Captain Richard Cloward, Director of the La Jolla Museum, who was generous enough to share his images of the Wheel, and was only welcoming when I spent hours taking photos of it during my 2016 visit.

Sarah Griffin is a medieval art historian interested in the use of museum collections for teaching, which she investigated as a Research Assistant for ‘Cabinet’ and as a Junior Teaching Fellow at the Ashmolean Museum. 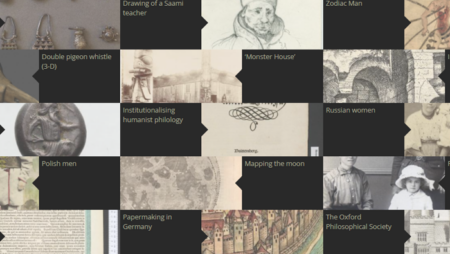