Skip down to main content
Published on
20 Sep 2018
The Oxford Internet Institute has announced the winners of the 2018 OII Awards, given to recognise extraordinary contributions towards the development, use or study of the Internet for the public good.

The Oxford Internet Institute (OII) has announced the winners of the 2018 OII Awards, given to recognise extraordinary contributions towards the development, use or study of the Internet for the public good. This year’s winners represent some of the most influential figures in the shaping of today’s Internet and online environment, hailing from the fields of information and communication technology, academia, law, and international development.

‘I am so delighted that the OII is recognising the outstanding achievements of these four incredible women,’ says Professor Phil Howard, Director of the OII. ‘The study and use of the Internet for public good is core to our OII mission, and these winners are remarkable in their efforts to support justice, inclusion and equality in so many aspects of technology use’.

Two winners will be presented with a Lifetime Achievement Award, recognising their outstanding vision, determination and hard work that have led to significant contributions to the understanding and use of the Internet over the years. Professor Judy Wajcman is a founding contributor to the field of the social study of science and technology and has carried out extensive research on the impact of digital technologies over the last decade. Her books, such as The Social Shaping of Technology, Feminism Confronts Technology, and Managing Like a Man, are regarded as classics in the field. She is a Fellow of the British Academy, has been President of the Society for Social Studies of Science, is a recipient of the William F. Ogburn Career Achievement Award from the American Sociological Association, and was awarded an honorary doctorate from the University of Geneva. Professor Wajcman is currently the Anthony Giddens Professor of Sociology at the London School of Economics. Karen Banks is a networking pioneer in the use of information and communication technologies for social change. She is a founding member of the Association for Progressive Communications’s (APC) Women’s Rights Programme, an international non-profit organisation that wants everyone to have access to a free and open internet. She has served on the UN Working Group for Internet Governance, was a founding trustee at Privacy International, was the winner of the inaugural Anita Borg Social Impact Award, and is a member of the Internet Hall of Fame. She currently serves as a director at GreenNet, a non-profit Internet service provider.

Two winners will be presented with the Internet and Society Award, which is given to outstanding individuals or organisations in recognition of their work in the development of the Internet for the public good through particular initiatives. Anasuya Sengupta is the Co-Founder and Co-Director of Whose Knowledge?, a global multi-lingual campaign that aims to centre the knowledges and voices of marginalised communities (the majority of the world) in order to create an Internet for and from everyone. Initiatives have included the 2018 Decolonising the Internet conference, the #VisibleWikiWomen challenge to add more images of notable women to Wikipedia, and the communities-led Knowledge Sharing projects. Anasuya is the former Chief Grantmaking Officer at the Wikimedia Foundation, Regional Program Director for Asia and the Pacific Islands at the Global Fund for Women, and a 2017 Shuttleworth Fellow. Nani Jansen Reventlow is the founding Director of the Digital Freedom Fund, which supports the advancement of digital rights in Europe through strategic litigation. She is a recognised international lawyer responsible for many ground-breaking freedom of expression cases around the world, such as the first freedom of expression judgement from the African Court on Human and Peoples’ Rights. Nani is an Affiliate at the Berkman Klein Center, an advisor to Harvard’s Cyberlaw Clinic, and a lecturer at Columbia Law School.

The 2018 OII Awards will take place on Friday 16 November 2018, beginning with a Lifetime Achievement lecture by Professor Judy Wajcman and drinks reception at the Bodleian Libraries. Book tickets now. 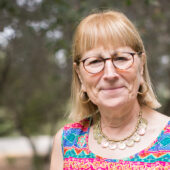 Judy Wajcman is the Anthony Giddens Professor of Sociology at the London School of Economics and Political Science.