Skip down to main content
Published on
23 Jun 2013
William Dutton was awarded the Frederick Williams Prize at the 2013 ICA conference in recognition of his outstanding contributions to knowledge concerning the social uses and impacts of new communication technologies. 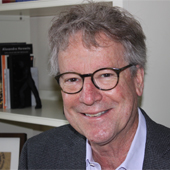 Dr William Dutton, the OII’s founding Director and Professor of Internet Studies, has been awarded the Frederick Williams Prize at the 2013 conference of the International Communication Association (ICA) in recognition of his outstanding contributions to knowledge concerning the social uses and impacts of new communication technologies. Dr Frederick Williams (1933-2010), former ICA President and founding Dean of the Annenberg School for Communication, was one of the first scholars to devote research attention to the study of new communication technology.

William Dutton said: “It is wonderful to be honoured by the ICA and its Communication and Technology Division. This particular award is even more meaningful to me as Fred Williams had such as positive role in my career and the study of communication and technology. Professor Williams was Dean of the Annenberg School when I joined the school in January of 1980. I was new to communication, coming from political science and policy studies, and Fred convinced me that a move into communication would be of value to my own research and to the field.

“More importantly, Fred Williams founded the Annenberg School at USC around the emergence of new media shaped by the convergence of computing and communication. Today, the study of new media is central to the field of communication, and the Communication and Technology Division is one of the largest in the ICA. But in the mid-1970s, when Fred launched the school around new media and what he called the ‘communications revolution’, many questioned his judgment. Professor Williams was exactly right and far ahead of the field as a whole. His vision paved the way for the field of communication to study new media, such as the Internet, and in many respects, for the founding of the Oxford Internet Institute.

“I received occasional emails from Fred during the early years of my role as founding Director of the OII. He would comment on our activities, and always boost my confidence in the visions guiding the OII. His pioneering role in shaping the field of communication may never be fully appreciated, but the ICA’s decision to create an award in his name is a major step in that direction, making me particularly proud and grateful to be the first recipient.”

The Williams Prize is awarded annually by the Communication and Technology (CAT) Division of the International Communication Association to recognize outstanding scholarly works and cumulative achievements that have advanced the study of communication technology. Nominations are be solicited from CAT members and the winner is announced by a selection committee at the CAT Division business meeting each year.