The previous blog post showed that gender is not powerful in explaining who are non- and ex-users of the Internet, whereas age is strongly related to non-use. In this post we examine life stage, education and income.

First, there are significant differences among non- and ex-users in terms of life stage. The largest proportion (59%) of non-users is among retired people. This is consistent with the age distribution of Internet use, discussed in the previous post, where we showed that the majority of people over 65 years old have never used the Internet. There is a slightly larger proportion of non-users among unemployed (18%) compared to employed (10%) Britons. The situation is reversed for ex-users. 11% of unemployed people have stopped using the Internet, compared to 5% and 2% of the retired and employed population respectively. A high proportion of ex-users among unemployed people may mean that when they lose their job people may also lose their Internet access. This is worrying and more could be done to help unemployed ex-users regain access to the Internet. Essentially all students are online. 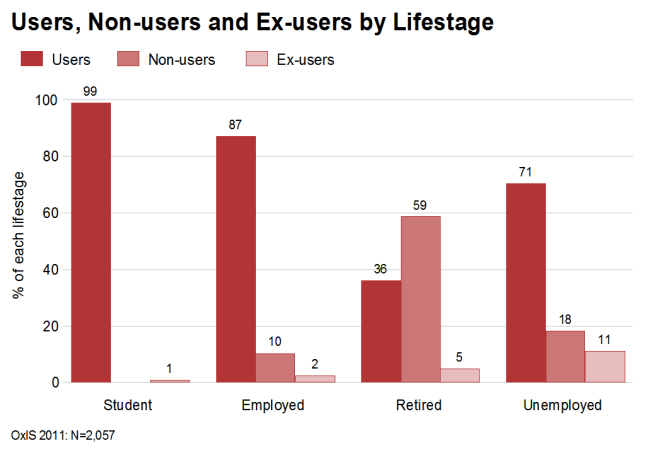 Non-users and Ex-users of the Internet by lifestage

Plotting use of the Internet against education, the most striking finding is in the “no qualifications” category: 61% of British population without any qualifications have never used the Internet. By contrast, the proportion of non-users is very similar, around 13%, among people with secondary or further education, and the lowest among those with higher education. These numbers may mean that schools play a very important role in getting people on the Internet for the first time and that more highly educated people find valuable uses for the Internet . Interestingly, education does not seem to be related to ex-use of the Internet. More or less similar proportions, around 5%, of people with different education levels have stopped using the Internet. Along with age, education is not an important factor in terminating the Internet use. 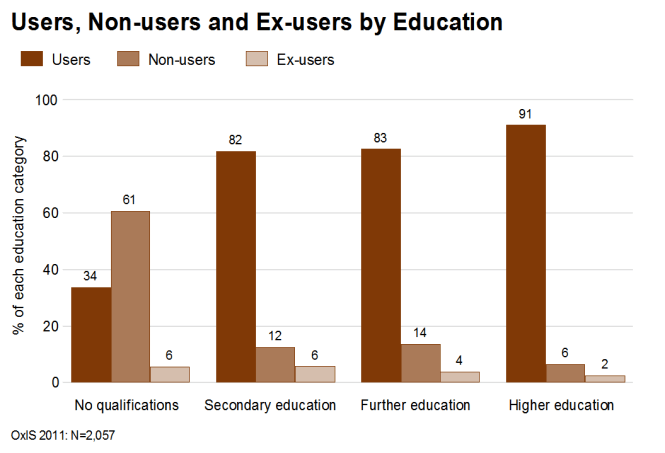 Non-users and Ex-users of the Internet by education

The final graph shows the distribution of non- and ex-users by income. There is a clear pattern: income is positively related to Internet use and negatively related to non-use. 45% of people with households incomes of less than £12,500 per year have not used the Internet before. The same is true for almost every third person on the next income category. On the right side of the income distribution more than 90% of people use the Internet. Ex-users follow the same pattern as non-users but not as strongly. The two lowest income levels groups have the highest proportions of ex-users: 12% and 6% respectively. 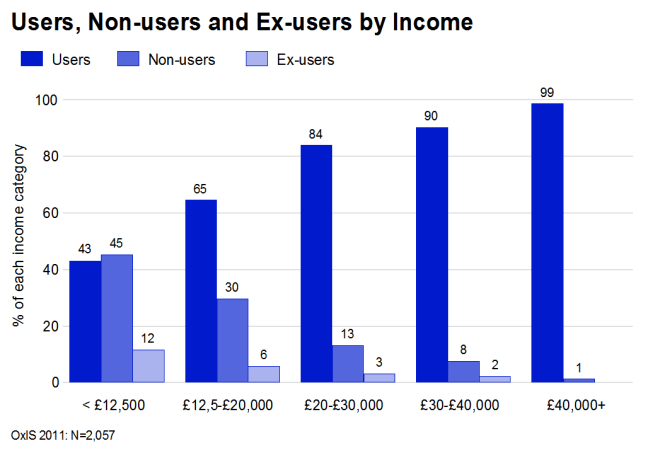 Non-user and ex-users of the Internet by income

Until now we have demonstrated that age and income importantly determines people’s likelihood to try use the Internet and that the most important factors of ex-use are most probably unemployment and low income levels. In the coming blog posts we will complement our analysis with non- and ex-users’ reasons for not using the Internet.