Skip down to main content
Published on
27 Sep 2018
Experts from the Oxford Internet Institute, University of Oxford analysed 150,000 profiles and a decade’s worth of eharmony communication data

When it comes to online dating, men are more likely to make the first move and pursue women with high levels of self-rated attractiveness.

This is according to a major new study from the Oxford Internet Institute, University of Oxford and Eharmony, which tracked changing preferences and communication patterns among single Brits over the past decade. Researchers analysed 150K profiles in the biggest study into dating trends of its kind – marking the online dating platform’s 10-year UK anniversary.

Despite marked changed to the online dating landscape – including the emergence of more app based platforms – researchers found that traditional gender roles and expectations persist. In fact, the number of men initiating conversations online has increased, from 6% in 2008 to 30% in 2018. What’s more, when women do make the first move, they receive 15% less communication than men.

Interestingly, self-identifying as ‘sexual’ is a major turn-off for both genders. Men and women who do so receive less messages overall.

Despite these seemingly set gender roles, the report, led by Dr Taha Yasseri, did suggest that online daters are becoming much more progressive in other areas. Both sexes have become less concerned with the income or education level of a potential partner.

However, some interesting gender splits remain. For example, women consider the income of a potential match as more important than men, but the importance of this trait has decreased over time, possibly in line with increased financial parity.

Researchers next explored which variables could predict ‘success’ in online dating, measured by the amount of communications received. For men, displaying more photos increases the likelihood of receiving messages, as does scoring highly on athleticism, agreeableness and altruism.

For women, being athletic was the strongest predictor of online success, alongside being romantic or altruistic. Over indexing as anxious, or clever all decreased the likelihood of women receiving messages.

Commenting on the findings, Dr Yasseri states, “Online dating will only continue to grow as an industry, yet already it’s able to provide a rich corpus of social data that documents our shared quest for human relationships in unprecedented detail and scale. This opportunity to revisit our relationship with eharmony after helping them launch in the UK a decade ago has produced fascinating results on both a micro and macro level. On an individual basis, it indicates that people have become much more tolerant. Factors including income, culture and religious orientation are all now less important in the overall search for a partner. However, this increased openness hasn’t yet scaled up on a societal level, with marked gender inequalities focused on physical attractiveness and male-led communication still apparent.”

Rachel Dinh the lead author of the report adds, “As online dating is here to stay as the new normal, it’ll become increasingly important for researchers and platforms to work together in order to produce socially valuable research. Working with this dataset upended several of our expectations and granted us unique insight into age-old questions about love and how it’s changed in the modern era.”

To find out more, read the report Computational Courtship: Understanding the Evolution of Online Dating through Large-scale Data Analysis 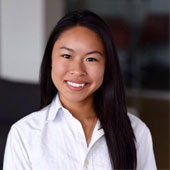 Rachel Dinh is from Los Angeles and graduated from the University of Pennsylvania. She previously worked at the World Economic Forum and ITIF. Her main research interest is electronic privacy.