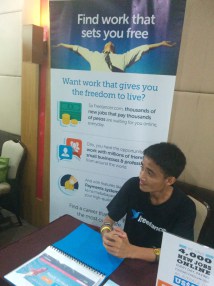 The photographs above come from a conference for online freelancers that Isis, Vili, and I attended in Manila a few days ago. The conference hall was packed with freelancers and potential freelancers looking to hear about ‘the future of work.’

We were in Manila to interview workers, managers, and policy makers as part of our research project on virtual production networks. Over the course of a month, we managed to speak with over 40 people. The work will all be published in papers and reports, but in the meantime we wanted to give a short overview of what we’re doing.

The interviews with policy-makers were intended to get a sense of how government and regulatory authorities conceive of the development potentials of digital work. Who do they think it will benefit, and how will it benefit those people.? Here, we learnt, for instance, that the government expects significant benefits to accrue to the country from digital work.

The interviews with managers were intended to understand how the companies the mediate digital work (i.e. the marketplaces) and the companies that contract digital work describe networks and geographies of value in the industry. Why is work flowing from and to specific places? And why is it being captured and created in specific ways? Here we learnt about some of the international divisions of labour of digital work (we will post more on this topic very soon).

And the interviews with workers were intended to understand the effects that digital work is having on the lives of people doing the work. It is here that we had some of our more illuminating conversations.

On one hand, most workers spoke about the freedom that online freelancing afforded them. They are able to work from home, look after children, and avoid Manila’s horrendous traffic (it is not uncommon to hear call centre workers speak about daily commute times of 2-3 hours). Many spoke about the relatively high pay they receive (compared to other work trajectories that they could see themselves embarking upon). Others spoke about the high barriers to entry in the business process outsourcing (BPO) sector that left them able to find freelancing work, but not BPO work. Some workers are particularly enthusiastic about their careers: inviting friends, family, and acquaintances to the platforms and projects that they are already enrolled into. Some attend conferences like that one I mentioned in the beginning of this post, and one person went so far as to make a YouTube video to encourage others to sign up.

On the other hand, most workers spoke about the tedium and loneliness associated with their profession. Labour is alienated, and many people have never been told (nor do they understand) why their clients want specific tasks completed. Job security is almost non-existent; as are benefits such as health insurance or pensions. Even worse is that fact that some workers feel compelled to take on highly problematic contracts. One young worker (who told us that we were the first foreigners that he had ever spoken to in-person) spent two weeks doing image tagging at a rate of 0.2 cents per image. Because he did not fully understand what the client needed, and because the client established an unfair rejection rate for the work, he ended up earning 80 cents for the two weeks of his life that he invested in the project. Many others spoke of waiting for many months to find their first contract and being willing to do extremely low-wage tasks just in order to establish themselves.

More structurally, it is also important to point to the ways that clients (usually in high income countries) are able to absolve themselves of risk. Much of the risk is placed onto workers who benefit in some ways when work is available, but are highly exposed in moments when work dries up.

There is much more that we still need to learn about flows of value in the sector; about who creates it and who captures it. And our findings will undoubtedly evolve as our research now moves to focus on Malaysia, then Vietnam, and then Sub-Saharan Africa. But in the meantime, we wanted to share some of our initial approach and our initial reflections.