David Watson was a member of our 2014 MSc group, joining us from Dartmouth College (after a few years spent in publishing). He’s currently a Data Scientist at Queen Mary University London, where he’s part of a bioinformatics research team that focuses on genomics and epidemiology. Interview with Karen Mead.

Karen: What first attracted you to the OII? And what were you doing before?

David: Before enrolling at the OII, I spent three years working as an Assistant Editor at HarperCollins Publishers. I was mostly doing fiction and poetry there, which was totally awesome but quite far removed from the research I would get into later.

I’d been thinking about the numerous ways the Internet alters just about every aspect of social, political, economic, intellectual (etc.) development since my undergrad days. I quickly got the sense that these technological shifts would require major reevaluations of almost everything–but what exactly that meant was always somewhat vague and elusive. I decided to apply to the OII to see if I could learn a thing or two about the subject. I wasn’t disappointed.

My OII MSc thesis was on crowdsourcing in the natural sciences. As a philosophy major, I decided to bring an epistemic focus to the topic that examined knowledge production patterns in this new e-research paradigm.

Karen: And what have you been up to since leaving the OII?

David: I’m currently a Data Scientist at Queen Mary University London, where I’m part of a bioinformatics research team that focuses on genomics and epidemiology. I’m also still in contact with several of my old Oxford profs, and am hoping to collaborate on a few projects with them in the coming months.

David: I can confidently say that I never would have had the skills to do my current job if I hadn’t studied quantitative methods at the OII. Before taking statistics last Michaelmas term, I hadn’t been in a math class for seven years(!). I decided to dive headlong into the field, taking a variety of data analysis modules Hilary term and teaching myself R during Trinity to work on my thesis research. I’m now doing full time quantitative analytics and loving it.

Karen: What job-seeking advice do you have for our students?

David: Stick with it! It took me a few months to land the job at Queen Mary, and I was getting pretty discouraged as summer turned to fall. But the wait was definitely worth it.

David: I hope to spend at least a couple of years beefing up my analytic skills at QMUL, hopefully publishing articles across a range of disciplines in the meantime. (I’m currently working on separate submissions to philosophy, biology, and data science journals.) If all goes well, I hope to eventually pursue a PhD. But don’t ask me where or what in just yet, please. 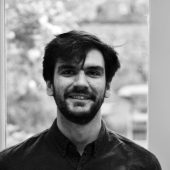 David Watson was a doctoral candidate at the Oxford Internet Institute, where his research focused on the epistemological foundations of machine learning.