Millions of people across the planet use online labour platforms to make their living as part of the global gig or platform economy. One part of the iLabour project is to understand how worker voice and collective action shape institutions in this setting.

Recently many online labour platforms have been altering their fee structures and when one major platform increased their fees (meaning a doubling of fees for many workers) over a thousand gig workers voiced their malcontent. Eight hundred and ninety-eight workers took to the platform’s own forum to express their dissatisfaction while five hundred and forty-seven signed an online petition in protest of the changes. Myself, Otto Kässi and Sanna Ojanperä recorded, analysed and mapped this new form of worker voice. 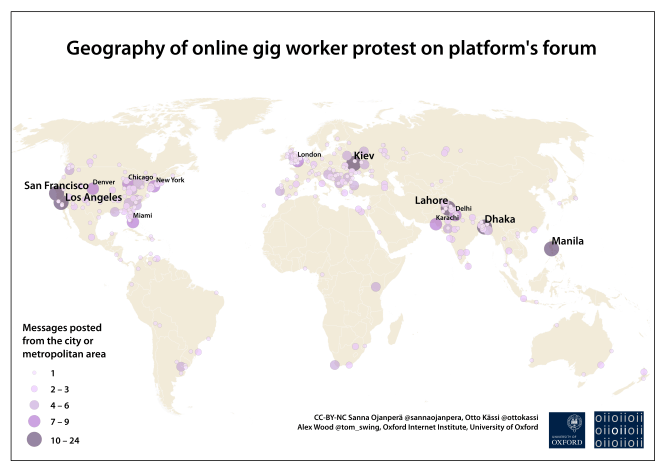 Despite workers being able to work remotely from literally anywhere in the world and thus being dispersed across the globe, these online actions were, nevertheless, largely concentrated in a number of major urban areas. Particularly, San Francisco, Los Angeles, Kiev, Islamabad, Lahore, Dhaka and Manila.

We know from our previous research, and that of others, that social networks play a crucial role in the work experience of these gig workers. Workers use these networks to gain information about the work and create a sense of community.

Interestingly, US workers were by far the most active in terms of voicing protest on the platform’s forum. But surprisingly it was Filipinos who were most active when it came to the petition even though it was created by a US worker. And Europeans were active in protesting on the forum but were practically silent when it came to signing the petition. What this pattern of action suggests is that largely different social networks supported these two forms of worker voice and that there were few links across those networks.

Spatial and cultural barriers seem to continue to shape online worker collective action just as they have done for conventional workers over the centuries. The Internet might have the potential to unite the workers of the world but our findings indicate that this doesn’t seem to take place at present. This in turn limits the forms of action which are possible and limits the scalability of mobilisation. 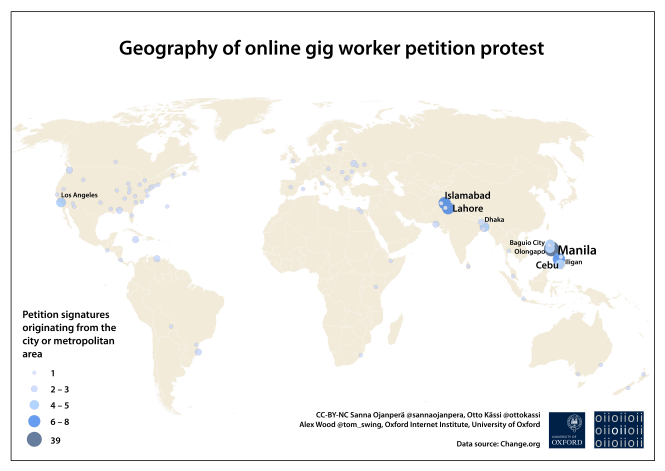