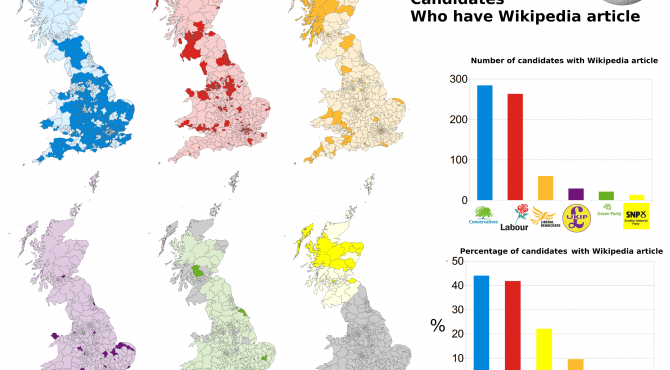 Some have called the forthcoming UK general election a Social Media Election. It might be a bit of exaggeration, but there is no doubt that both candidates and voters are very active on social media these days and take them seriously. The Wikipedia-Shapps story of last week is a good example showing how important online presence is for candidates, journalists, and of course voters. We don’t know how important this presence is in terms of shaping the votes, but at least we can look into the data and gauge the presence of the candidates and the activity of the supporters. In this post and some others we present statistics of online activity of parties, candidates, and of course voters. For an example, see the previous post on the searching behaviour of citizens around the debate times.

Candidates and parties are very much debated by supporters on social media, particularly Facebook and Twitter. But how active are candidates themselves on these platforms? In this post we show simply how many candidates from each party and in which constituencies have a Twitter account. Some of them might be more active than others and some might tweet very rarely, and we will analyse this activity in the next posts. Here we count only who has any kind of publicly known account. 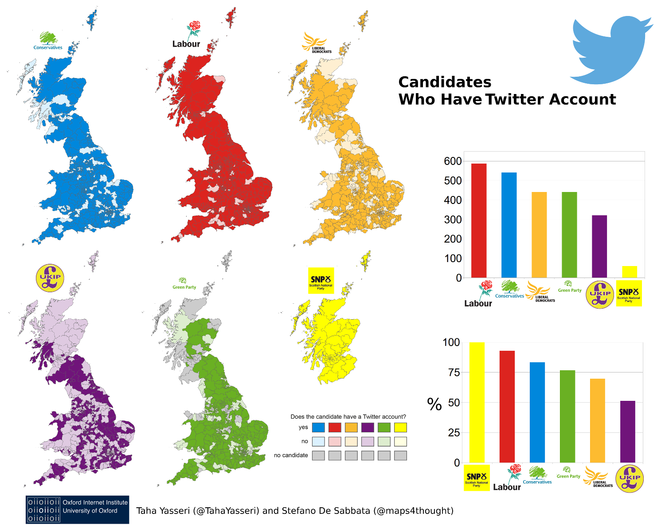 The figure above shows the geographical distributions of candidates for each party and whether they have a Twitter account. There are some interesting results in there. For example, Labour has the largest number of Twitter-active candidates, whereas ALL the SNP candidates tweet. While LibDem and Green parties have the same number of accounts, normalised by the overall number of constituencies that they are standing in, Green seems to be more Twitter-enthusiastic. UKIP loses the Twitter game both in absolute number and proportion.

Who is on Wikipedia?

Having a Twitter account is something of a personal decision.  A candidate decides to have one and it’s totally up to them what to tweet. The difference in the case of Wikipedia, is that ideally candidates would not create or edit one about themselves. Also the type of information that you can learn about a candidate on their Wikipedia page is very different to what you can gain by reading their tweets. Geographical distribution of the candidates, whom Wikipedia has an article about.

The figure above shows the constituencies that the candidates standing in are featured in the largest online encyclopaedia, Wikipedia. Here, Tories are the absolute winners, in terms of the number of articles. Greens are the least “famous” candidates and LibDem are well behind the big two. In the next post we will explore often voters turn to Wikipedia to learn about the parties and candidates, and I’m sure by reading that you’ll be convinced that being featured on Wikipedia is important!

All right, so far, Labour won Twitter presence and Tories took Wikipedia (remember all the SNP’s also have a Twitter account). But how about the gender of the candidates? Is there any gender-related feature in social presence pattern of the candidates?

First let’s have a look at the gender distribution of the candidates. 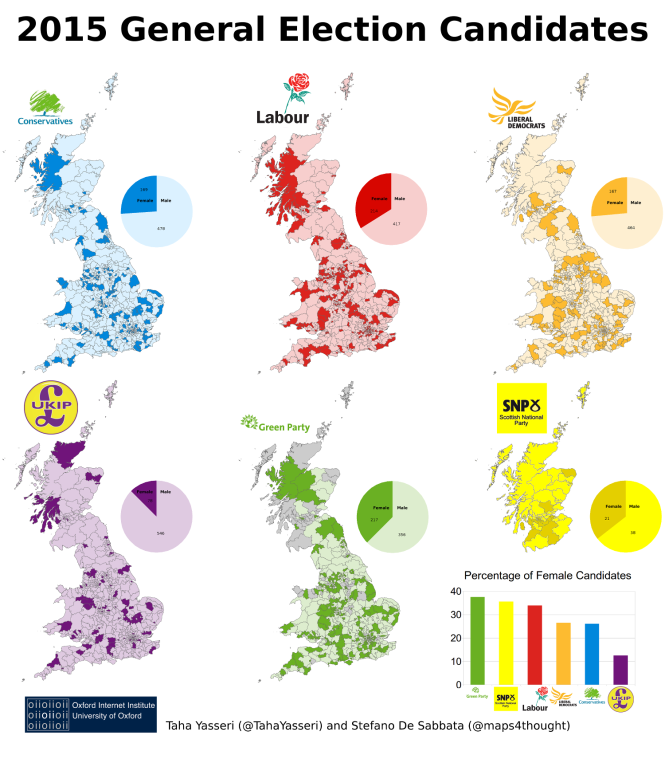 Geographical distribution of the candidates colour-coded by gender.

As you see in the figure above, there are fewer female candidates than male ones across all the parties. Only 12% of the UKIP candidates are female while the Greens have the highest proportion at 38%. Tories sit right next to UKIP on the list of the most male oriented parties. There is also a clear pattern that most of the constituencies in the centre have male candidates.

How about social media?

The data that we used to produced the maps and figures come mainly from a very interesting crowd-sourced project called yournextmp. However, we further validated the data using the Wikipedia and Twitter API’s. If you want to have a copy, just get in touch!