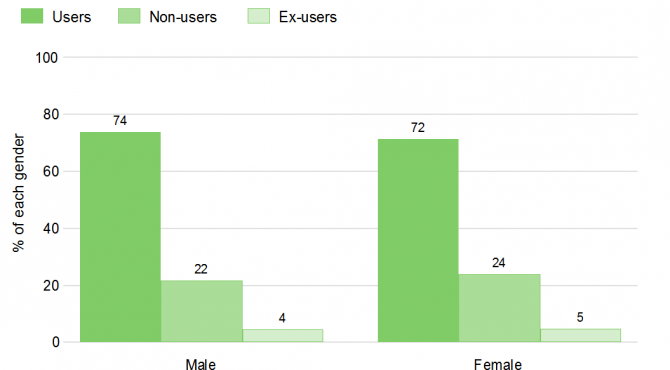 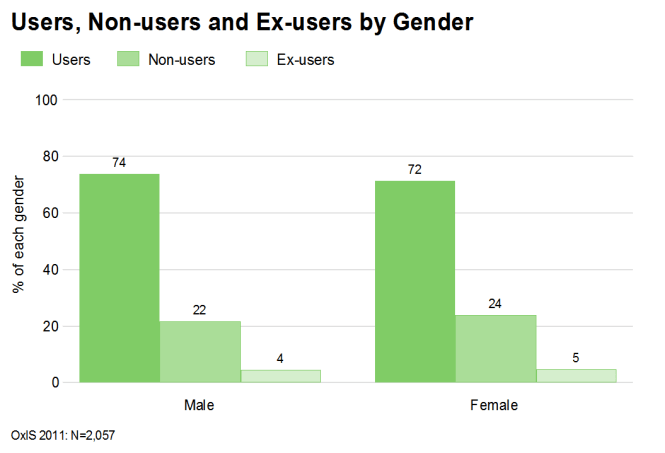 Non-Users and Ex-users of the Internet by gender

However, age displays a pattern very different from gender. In the graph below we plot the proportion of users, ex-users and non-users across age categories. The graph tells two stories. As expected, the proportion of non-users increases with age. There are no non-users of the Internet among youngsters, whereas only 4% to10% of the population aged between 18- to 44-years are not using the Internet. This proportion rises to 16% in the following age group. Then the curve rises steeply, indicating that non-use of the Internet is strongly present among older British population. By and large people who have never used the Internet tend to be elderly, above 65 years old. Yet, policy makers should probably focus on the middle-aged (45 to 64 years) population which might be more interested in starting to use the Internet if appropriate policies were implemented.

By contrast, the proportion of ex-users is stunningly stable across all age groups: there are about 5% of people who stopped using the Internet in every age group across British population. Ex-users are almost equally likely to be young or old. Whatever processes generate ex-use, they operate across the entire age range. This is very unusual, because almost everything that has to do with the Internet is related to age. But being an ex-user is not age-related. Furthermore, contrary to much conventional wisdom the category with the highest proportion of ex-users is young: 18 to 24-year-olds (7%). 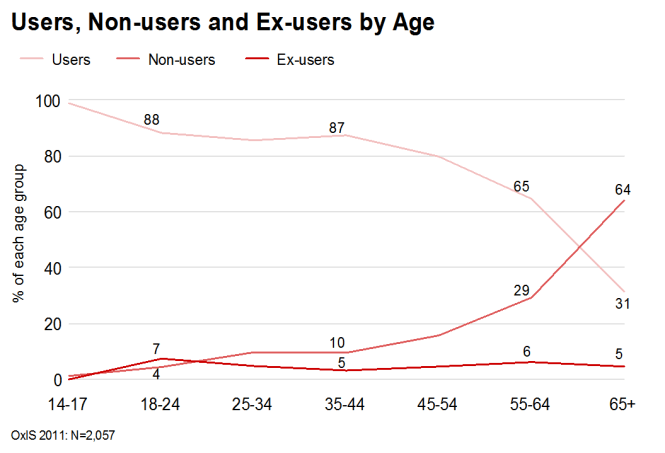 Non-users and Ex-users of the Internet by age

The contrast between non-users and ex-users indicates that the mechanisms that cause a respondent to be an ex-user or a non-user are very different. While age is an important factor determining who adopts the use of the Internet, it does not have the same power in explaining who stops using it. Because of this very different policies will be required to effectively encourage use among these two groups.