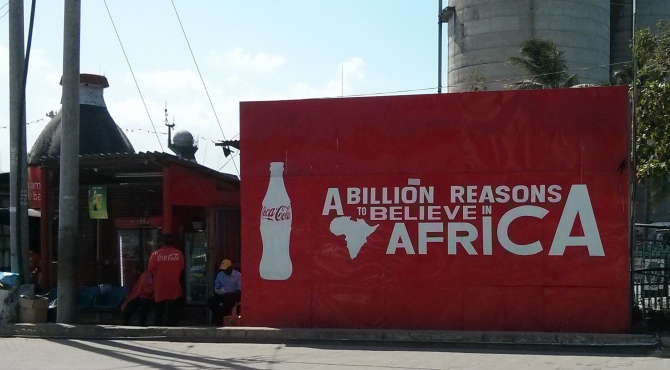 I am very happy to announce a new paper: ‘Contradictory Connectivity: Spatial Imaginaries and Techno-Mediated Positionalities in Kenya’s Outsourcing Sector.’ A pre-print is available below.

East Africa has traditionally been characterised by stark barriers to non-proximate communication and flows of information. It was the world’s last major region without fibre-optic broadband internet access, and until the summer of 2009 had been forced to rely on slow and costly satellite connectivity. This all changed when the first of four fibre-optic cables was connected in Kenya: bringing with it the promise of fast and affordable internet access for the masses, and the ability of the country to move towards a knowledge-based economy. Within the context of this moment of change, this paper explores the ways that managers of outsourcing firms envisage ‘connectivity.’ Over the course of 41 interviews, contradictory spatial imaginaries were discovered. When describing their perceptions of the country’s new techno-mediated positionalities, many interviewees repeated visions that allowed geographic frictions to evaporate. But when managers were asked about their actual mediated positionalities, they presented a very different world: one of barriers, frictions, and the very real role that distance continues to play in the world’s economic peripheries. The goal of this paper is to interrogate why we see such stark disconnects between perceptions and practices of connectivity. The contradictions could be seen as an exposition of a scalar schism between internationally-operating regimes of truth (i.e. powerful discourses that have their origin non-locally) and local experiences and practices in Kenya. Alternatively, we can think about the contradictory accounts of connectivity as emergent from strategic spatial essentialisms that are practiced to achieve particular goals. By focusing on the contradictions embedded into the ways in which people speak about connectivity in the Kenyan outsourcing sector, we can learn much about how arguments about the entanglement of connectivity, growth, and development are operationalized. ‘Connectivity’ is offered as a necessary, and sometimes even sufficient, condition from which growth and economic development can be brought into being: a set of spatial imaginaries that conveniently support a national development strategy of remaking Kenya in the contemporary knowledge economy.

I would like to extend thanks to Nicolas Friederici, Heather Ford, Chris Foster, Isis Hjorth, Eric Sheppard and the anonymous referees for their comments, constructive critique, and guidance. Postdoctoral research assistant Laura Mann conducted much of the fieldwork and coding of interviews. This work was also made possible by a research grant from ESRC-DFID (Grant reference (RES-167-25-0701) and ESRC reference (ES/I033777/1)). Finally, I would like to thank all of the managers, technicians, engineers, planners, administrators, and workers who graciously contributed their time, and patiently answered interview questions.

Note: This post was originally published on the OII's Geonet project blog on 22 January 2015 6:48 pm. It might have been updated since then in its original location. The post gives the views of the author(s), and not necessarily the position of the Oxford Internet Institute.