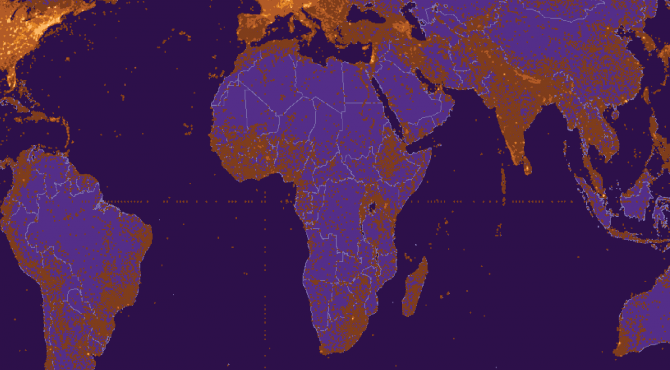 The first stage of the Geonet project aiming to broadly understand the diversity of new practices in Sub-Saharan Africa’s knowledge economy is off to a good start. Beyond collecting data about the quaternary sector, IT-enabled services, and knowledge production in the region, we have started drafting the first articles. We will start by reviewing the extent to which the views of key international institutions and African governments on the economic impacts of changing connectivity are supported by robust research findings. We will also review the myriad definitions of the ‘Knowledge Economy’ present in academic and policy research, focusing on the Sub-Saharan African context. Using a dataset of transactions from oDesk, the world’s largest online platform for outsourced contracts, we will study how and why wages differ between digital labor contractors based on their country of location. We will also map and measure online geographic information to investigate digital divisions of labour.

The below abstracts summarize our initial paper ideas — we welcome any thoughts you may have regarding these topics. Keep an eye on the publications page for future articles.

This paper identifies the views of key international institutions and African governments on the impacts of changing connectivity on economic development. It investigates the evidence that is commonly cited by powerful organisations and governments to support assertions about the impacts of ICTs, and whether that evidence reflects the depth of robust research findings on the effect of connectivity on economic development. Domestic and international policymakers have devoted sizable (scarce) resources to projects and policies based on the assumption that increased connectivity leads to economic development increasing growth and reducing inequality. By employing a critical content analysis of both policy and academic sources, we will ultimately be able to understand both the claims that policy makers promulgate about the economic effects of ICTs, and the available academic knowledge base on that topic.

Toward a Regional Definition of Knowledge Economies: An Inquiry Into the Sub-Saharan African Context

In the last few years the international connectivity of Sub-Saharan Africa has increased dramatically. As a result, politicians, journalists, academics, and citizens alike have been speaking of an ICT-fueled economic revolution brought about by all of this new connectivity. This paper reviews the myriad definitions of the ‘Knowledge Economy’ present in academic and policy literature and research and develops a taxonomy based on their main features. Doing so allows us to understand the economic practices, both formal and informal, that have been captured within the ‘Knowledge Economy’ moniker. This, in turn, facilitates insights into the discursive power of the ‘Knowledge Economy’ idea. By asking what the term includes and excludes, in the contexts of Sub-Saharan Africa, we will be able to understand: whether, and where, changes are envisioned by a move towards a ‘knowledge economy’, what changes are envisioned by a move towards a ‘knowledge economy’, and who those changes are envisioned to benefit. This work will ultimately allow future empirical quantitative and qualitative research into ‘knowledge economies’ to identify whether actual changes, practices, and processes match the myriad expectations for them in Sub-Saharan Africa.

Liability of Origin in Digital Labour: Evidence from oDesk

The purpose of this research is to investigate whether wages differ between contractors of digital labour based on their country of location and which factors may drive these differences. The internet has been predicted to bridge geographical distances between workers and employers as many tasks can be carried out from different physical locations. The “online labour market” consists of websites, where workers can digitally deliver their services to clients anywhere in the world. While the digital labour market may technically be able to eliminate the geographic barriers between workers and employers in different countries, there may be other barriers that limit the digital flows of labour. We hypothesize that domestic service sector wages and higher online visibility may affect the wages that a worker from a certain country is able to earn. To investigate these hypotheses, this study uses econometric methods to analyse a dataset of transactions from oDesk, which is the world’s largest online platform for outsourced contracts. The results of this analysis may be useful for further research on whether online labour markets hold promise to function as a tool for economic development.

Information is the raw material for much of the work that goes on in the contemporary global economy, and there are few people and places that remain entirely disconnected from international and global economic processes. As such, it is important to understand who produces and reproduces, who has access, and who and where are represented by information in our contemporary knowledge economy. Visibility and voice in the information ecosystem is a prerequisite for influence and control in the knowledge economy (Castells 2000, 2002; Malecki and Moriset 2008). Or as Hand and Sandywell (2002: 199) have argued, “digitalized knowledge and its electronic media are indeed synonymous with power.”

Many now argue the Internet is allowing a democratisation of geographic information production and that almost anyone can produce any type of information, about any place, from anywhere. Yet it is remarkable how little we know about contemporary geographies of geographic knowledge and the ways that those information landscapes are changing over time.

This paper is based on an effort to map and measure some of the key platforms and intermediaries of online geographic information using bespoke software and visualisation techniques. What we find are distinct ‘data shadows’ and distinct digital divisions of labour: with voice, participation, and representation heavily concentrated and clustered in only a few parts of the world. The paper then concludes with reflections about why in any of potential digital ubiquity, we continue to see such concentrated geographies of information.