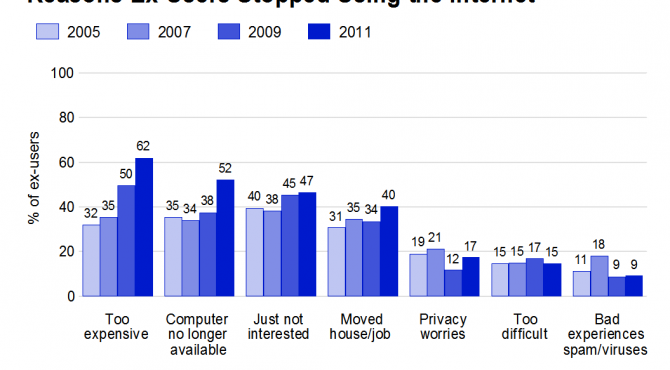 The reasons why ex-users stop using the Internet change over time. The graph below tells an interesting story. In 2005 the majority, 40% of ex-users said that they are just not interested in using the Internet. This reason was followed by about 35% saying they have no longer a computer available and that the Internet is too expensive for them. In 2011 we observed a very different pattern, with over 60% of ex-users indicating the Internet is too expensive for them, and over 50% saying they no longer have a computer available. Again, we see that nowadays ex-use of the Internet is related to physical constraints more than it used to be in the past. Other reasons such as worrying about privacy and viruses or not figuring out how the Internet works, stayed stable over time at around 15%. 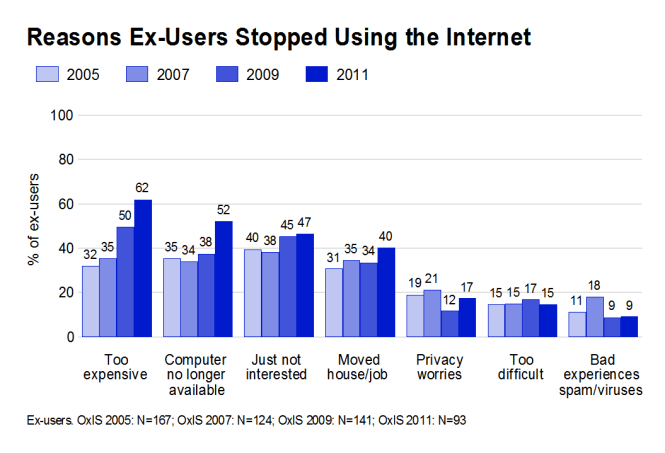 Next, we are interested whether different ex-users have diverse reasons for not using the Internet anymore. So, we look at reasons by life stage.

In addition to life stage we compare reasons for stop using the Internet by occupation.  Ex-users with managerial and professional occupation are distinct by stating that they no longer use the Internet since they do not have access to a computer and worry about privacy issues related to the Internet use. On the other hand ex-users in clerical professions most often provide next three reasons: they are not interested in Internet use, the Internet is too expensive and they no longer have a computer available. Lastly, blue collars state similar reasons but in a different order.