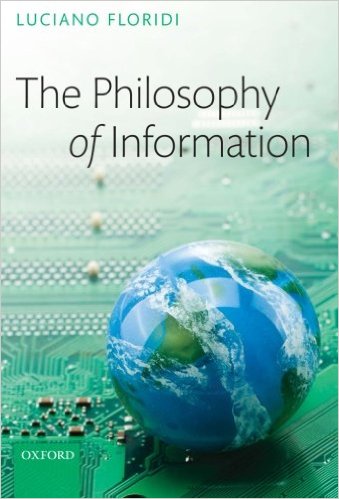 Luciano Floridi presents a book that will set the agenda for the philosophy of information. PI is the philosophical field concerned with (1) the critical investigation of the conceptual nature and basic principles of information, including its dynamics, utilisation, and sciences, and (2) the elaboration and application of information-theoretic and computational methodologies to philosophical problems.

This book lays down, for the first time, the conceptual foundations for this new area of research. It does so systematically, by pursuing three goals. Its metatheoretical goal is to describe what the philosophy of information is, its problems, approaches, and methods.

Its introductory goal is to help the reader to gain a better grasp of the complex and multifarious nature of the various concepts and phenomena related to information. Its analytic goal is to answer several key theoretical questions of great philosophical interest, arising from the investigation of semantic information.

“The impressive and exciting project that Floridi undertakes in his book is aimed at establishing the philosophy of information as a mature subdiscipline of philosophy, with its own method and research programme … Floridi’s book not only presents a comprehensive framework for the philosophy of information but also makes a strong case for its legitimacy as a mature subdiscipline of philosophy. The intellectual debates and new research that it has already stimulated testify to its importance as a significant contribution to the literature.” – Hilmi Demir, Mind

“the non-technical portions are understandable to everyone and provide plenty of food for thought.” – Steven Harnad, Times Literary Supplement

“This is a monumental work … Floridi goes through much of contemporary philosophy, as seen through a lens fashioned from the concept of information … The Philosophy of Information is a lovely source of ideas, and also a wonderful indication of how much there might be to gain for philosophy by looking at contemporary computer science.” – Staffan Angere, Theoria

“This is an ambitious book … there is a great deal to admire in this book, including much to admire philosophically. For example, some of the material on epistemology, especially Ch. 13 but also some of his work on the definition of knowledge, is masterful … this an intriguing, eye-opening work” – Frederick Kroon, Journal of Applied Philosophy

“Given the breadth and depth of coverage of all its topics, the careful organisation and structuring of concepts, and the relevance of its contents, The Philosophy of Informationshall be deemed essential reading for philosophers and computer scientists alike, especially those interested in Artificial Intelligence.” – Flavio Soares Correa da Silva, AISB Quarterly

“Just around the beginning of the new millennium, Floridi began his important and influential program, and this book brings between two covers much of his previous work, and also augments, updates, and connects these publications … Floridis book sets an ambitious agenda for the philosophy of information … there is much of interest and value in this major book.” – J. Michael Dunn, Metascience

“The Philosophy of Information is clearly a work of great ambition, originality, and value.” – Stephen Leach, Metapsychology

“Very well written, and clearly presented. … many authors have written about philosophy and information before, but no-one has set out to deal with it in such a thorough way. This is clearly a very important book, and I think it justifies the author’s claim that it describes the first philosophical analysis of information in all its aspects.” – David Bawden, Library and Information Research