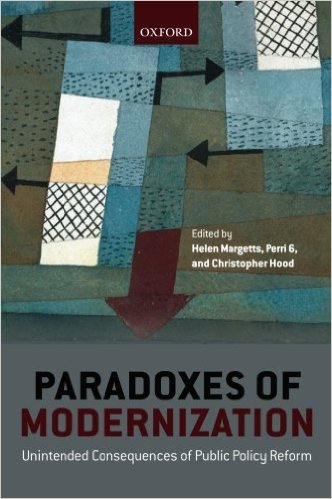 This book explores the unintended and unanticipated effects associated with ‘modernization’ projects and tackles the key question that they provoke – why do policy-makers persist in such enterprises in the face of evidence that they tend to fail?

Paradoxes of Modernization first discusses what is meant by ‘modernization’ and ‘unintended consequences’, placing public policy reform within more general intellectual and social trends. It presents eight case study ‘modernization’ projects. Their architects promised faster trains, a more efficient and reactive health service, a more motivated public service, better performing local government, enhanced information for prospective US university students, reduced rates of child malnutrition in developing countries, and a free, open, safe, interconnected cyberspace for people to conduct their social and political life. Each case provides a neat story with a paradox that varies the modernization theme and tackles the question: why was the project pursued? The conclusion categorizes the cases in terms of their outcome, from success to disappointment, and suggests some strategies for a more balanced version of modernization for current and future policy-makers.

“highly relevant to the modern complex world of evidence-based policy and joined up government. It provides a valuable contribution to the field.” – Andrew Steven Gunn, Political Studies Review