Tim Hwang is a researcher and lawyer working at the intersection of technology, public policy, and economics. His current work focuses on the social impact of developments in artificial intelligence and machine learning. Dubbed the “The Busiest Man on the Internet” by Forbes, his work has appeared in the New York Times, the Washington Post, Wired Magazine, The Atlantic, and the Wall Street Journal, among others.

Previously, he led the Intelligence & Autonomy Project, a two-year research initiative on AI/ML supported by the John D. and Catherine T. MacArthur Foundation. He is on Twitter @timhwang. 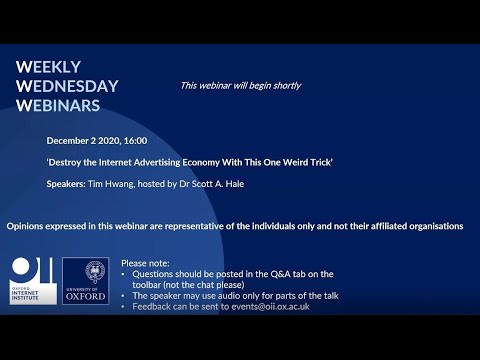 Destroy the Internet Advertising Economy With This One Weird Trick

With Tim Hwang, and Dr Scott A. Hale

The OII welcomes Visiting Policy Fellow Tim Hwang, to discuss his new book 'Subprime Attention Crisis' with Dr Scott A. Hale. Tim is a researcher and lawyer, working at the intersection of technology, public policy and economics.

IRL Podcast: Bot Or Not