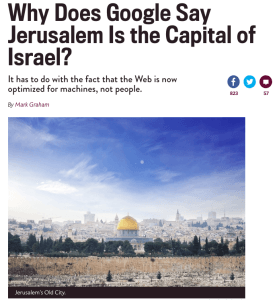 Slate just published a piece of mine about the move from a human-readable web to a more machine readable web. Here’s a short extract from it:

Linked data organized through the semantic Web can be easily integrated, repurposed, collected, classified, published, and indexed. It is, however, important to recognize that making the Web more machine-readable comes with a price.

Linked data and the machine-readable Web have important implications for representation, voice, and ultimately power in cities, and we need to ensure that we aren’t seduced into codifying, categorizing, and structuring in cases when ambiguity, not certainty, reigns. There is perhaps still much to be said for a Web more tailored to humans rather than machines.

The piece uses the contested nature of Jerusalem’s status as a capital city to point to the ways in which linked data and a more semantic web often necessitate the removal of important nuance.

The piece (and my Twitter account and email address) has also been bombarded by pro-Israeli (or perhaps anti-Palestinian) activists (trolls?). Some take issue with the fact that the piece points out that Jerusalem’s status as a capital is contested. Others are outraged that I imply that many people (and indeed most countries on Earth) also consider that a Palestinian state exists and that its capital is also considered to be Jerusalem.

Example of comments in the piece:

Interestingly, those people are acting in a similar way to the very algorithms and data structures that the piece critiques: refusing to accept that multiple positions on a very contested place exist.

What I should reiterate as a response is that my goal is not necessarily to argue for one side or another. But it is to point out that there is more than one position on the issue, and that Google – because of their embracing of the move to a more machine-readable web – is picking a side.

Head over to Slate for the full version: Why Does Google Say Jerusalem Is the Capital of Israel?