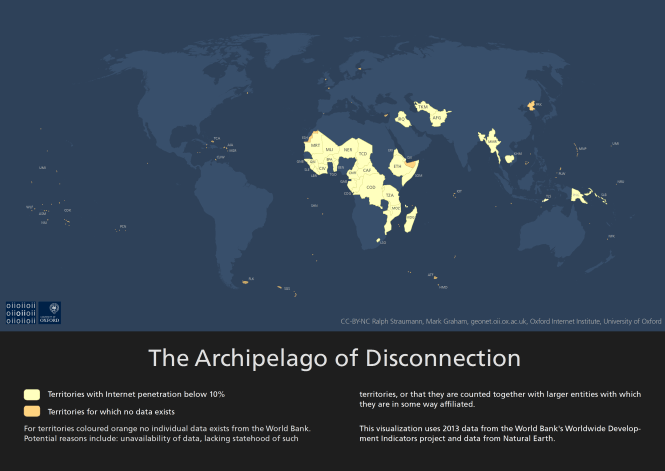 The two previous blog posts in this small series discussed Internet population and growing Internet access worldwide. In this post we turn our eyes to territories that are largely left out of global digital connectivity. We look at these areas in terms of Internet penetration (i.e. the share of their population that have “used the Internet (from any location) in the last 12 months” where “Internet can be used via a computer, mobile phone, personal digital assistant, games machine, digital TV etc.” (source: UN)).

The above map highlights all territories that either have Internet penetration below 10% (i.e. less than 10% of their population accessed the Internet in 2013) (yellow in the map), or for which no data from the World Bank exists (orange in the map). A lack of data can exist for several reasons, for example: some of these territories are statistically grouped together with bigger entities (e.g., likely the United States Minor Outlying Islands with the United States), no data have been collected or inferred, or the territories lack widespread recognised statehood. Some of the territories that show up as orange in the above map do actually have high levels of Internet penetration in reality (e.g., Cyprus, or the Isle of Man). For others, however, we suspect that Internet penetration is indeed low.

The map hightlights an archipelago of land that is mostly disconnected from the Internet and thus largely barred from participating in the cultural, educational, political, and economic activities that it affords. This archipelago of disconnection has its centre of gravity in Sub-Saharan Africa where 28 countries have Internet penetration rates beneath the 10% threshold we applied. Among these Sub-Saharan nations with very low connectivity there are some very populous countries – the three largest are Ethiopia (with 94 million inhabitants), the Democratic Republic of the Congo (68 million), and Tanzania (49 million) with an overall Internet penetration of a mere 2.6%.