Skip down to main content
Published on
12 Nov 2012
Social entrepreneur Jennifer Pahlka has received an Internet and Society Award from the Oxford Internet Institute, in recognition of her contribution to digital open government in the US. 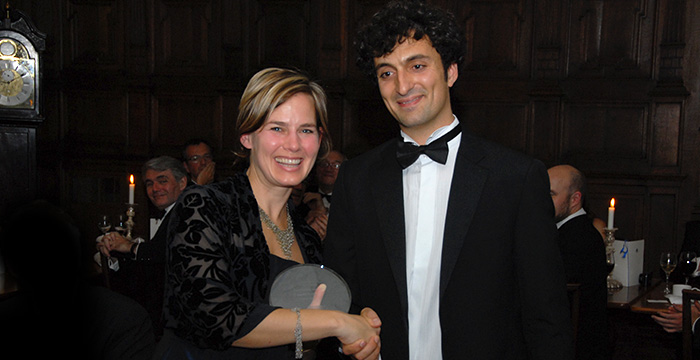 Jennifer Pahlka has received an Internet and Society Award from the Oxford Internet Institute, in recognition of her contribution to digital open government in the US.

After graduating from prestigious Yale University, Jennifer Pahlka made her mark in media for computer game developers, before in 2009 creating ‘Code for America’, which uses ‘geek’ volunteers to improve local government. This non-profit organization has enabled programmers and digital designers from industry to work with cities to open data and develop apps that reimagine the relationship between citizens and local government.

Jennifer Pahlka said: “I’m honoured to be recognized by the Oxford Internet Institute and would like to dedicate the award to all the innovative public servants and regular citizens who believe government can work like the Internet and are taking the risks and doing the hard work to bring this vision to life.”

The award was presented on 9 November in Oxford, at an awards dinner and ceremony that also included an Internet and Society Award for Raspberry Pi, and a Lifetime Achievement Award for Yochai Benkler.

Viktor Mayer-Schoenberger, Professor of Internet Governance and Regulation at the OII, said: “It is a great honour to be able to present this award to Jen Pahlka, whose vision and actions have demonstrated so forcefully the ways in which the Internet can be harnessed to empower citizens and strengthen local democracy.”

Jennifer Pahlka is the founder and Executive Director of Code for America, a San Francisco-based non-profit organization that, according to the Washington Post, “is the technology world’s equivalent of the Peace Corps.” Code for America has received funding from an amazing roster of prestigious foundations including the Omidyar Network, the Knight Foundation, and Google.org. In 2012, Pahlka was named an Ashoka Fellow, and in 2011 the Huffington Post named her a Gamechanger for her efforts in using the Internet to improve citizen engagement with local government. Before founding Code for America, Pahlka spent eight years at CMP Media (now part of United Business Media), where she led the Game Group, responsible for the Game Developers Conference (GDC) and Game Developer Magazine. She spent her early career working in the non-profit sector.