Qualitative research not only allows you an in-depth exploration of what other people think, feel or do (and why), it also makes you aware of some of your own quirks and habits.

Once the audio recordings of interviews and focus groups have been professionally transcribed, it is sometimes slightly embarrassing to be confronted with your own contribution to the conversation. The text you have spoken is far removed from the polished papers you normally write. I have noticed that in my most recent focus groups I use the word ‘so’ rather excessively. Many of my sentences start with “So, …”, and the word also appears somewhat randomly in the middle of a sentence. Analysing the transcripts, this really gets on my nerves.

Why have I not noticed it in previous interviews? Is it a quirk I have picked up recently? Or have I been driving people mad with this habit for years? And why do I constantly use this sentence-initial? 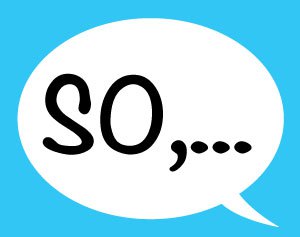 I first assumed that I insert “So, …” to give me extra time to think about the rest of the sentence. However, I had already noticed the irritating habit in my informal emails as well. I now specifically edit my mails to delete the Sos before sending them off. I don’t need extra time to think when writing emails, and still I scatter the Sos around as if they’re going out of fashion.

Apparently I am not the only person with a so-habit. Jane Solomon has written a blog post for the Dictionary.com site about the observed increase in speakers beginning sentences with the word so. She points out: “One explanation is that in this case, so is being used as a filled pause, much in the way that “well,” “um,” and “like” are used in conversation. However, […] this explanation is overly simplified; so as a discourse marker is “more nuanced” than that. […] So is not being used just to fill a pause, it seems, but as a tool for conversation management”. We also learn from her article that the word ‘so’ is very versatile. It can be used as an adverb, a conjunction, a pronoun, an interjection, or an adjective. No wonder I manage to squeeze it into almost every sentence!

Now that my research has made me aware that I am part of this new (and annoying) trend, I will try to cut down on my ‘so’ abuse. No doubt it will be replaced with the overuse of another word.