On November 7th 2014 I had the great pleasure of presenting Sir Tim Berners-Lee the OII Lifetime Achievement Award. Below is a copy of my remarks:

Good evening, my name is Elizabeth Dubois and I am a doctoral candidate at the OII. I am delighted to present the final award of this evening to the creator of the world wide web. Fun fact, I just so happen to be the same age as the world wide web.

Despite what a recent Twitter photo and t-shirt suggest, the inventor is Professor Sir Tim Berners-Lee.

In 1989 Sir Tim Berners-Lee was working at CERN and proposed a project that would allow users of the Internet to share documents and information in a globally-standardized and open fashion.

By 1994, the world wide web and I were both five. I was busy trying to convince my mom to bring my pesky baby sister back to the hospital she came from, because, quite frankly, the shouting was bothersome. Sir Tim Berners-Lee, on the other hand, was making it possible for the world to bring new information and ideas into their homes to an unprecedented degree. 1994 is the year Professor Berners-Lee founded the World Wide Web Consortium which keeps the web we know and love running in a standardized way.

Over the ensuing two decades Sir Tim Berners-Lee articulated a vision of a World Wide Web which is open and free. He has directed the World Wide Web Foundation, been deeply engaged in open government data initiatives, advocated for a semantic web, taught, researched, and written – spending time most recently at MIT and the University of Southampton.

He has explained to us what it means to be connected.

He has equipped us with the tools we need to exchange information and communicate freely.

And, he has demonstrated to us that sharing information can be more valuable than controlling it.

Sir Tim Berners-Lee, knighted in 2004 and a recipient of countless other awards and honours, has exhibited a commitment to making our lives better through the development of technology.

On Twitter he states, or perhaps implores, “let the web serve humanity.”

And so, in awe, we honour him tonight. Please join me in thanking Professor Sir Tim Berners-Lee for his service to humanity as one of the most transformative figures, certainly in my lifetime if not everyone’s here, in the realm of information and communication technologies. 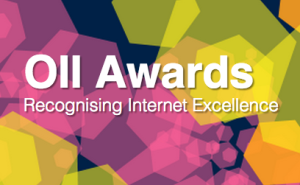