With all the recent talk of the zombie apocalypse, including our own forthcoming book chapter on a similar topic, we’ve been worried that the older and slightly disheveled population has been put at greater risk of personal injury due to their being confused for the undead [1]. Always eager to lend a helping hand, the Floatingsheep collective has turned to the infinite wisdom of the collective internet to map the relative prevalence of zombies and old people. It is our hope that this guide will help lower the level of zombie hunter on senior citizen violence that has plagued human kind for generations [2].

Zombies and Old People in Europe 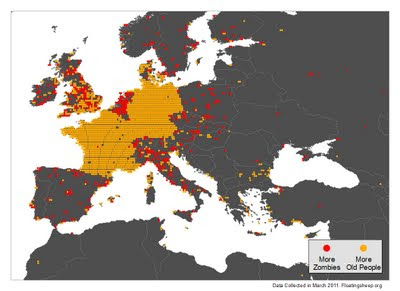 Europe, for example, presents a quite clear picture of the spatial variation in the zombie and elderly populations. Word to the wise for our transatlantic zombie-hunting compatriots: hold your fire in France and Germany. Though we have no idea why there are so many old people, do make note that these are innocent citizens. Unless, however, the zombies have established a colony in these countries and have just effectively been able to hide their presence under the guise of retirement homes [3].

Do, however, be on the lookout in the low countries, as zombies appear to be rampant in the Netherlands as well as much of Belgium [4].

Zombies and Old People in the USA 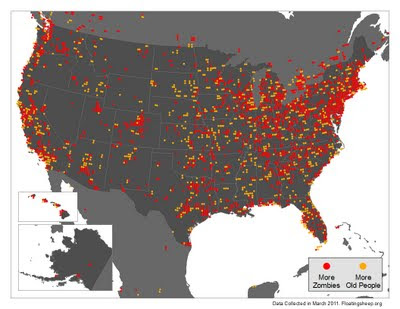 When looking only at the United States, however, there is no such easily discernible spatial pattern. Though much of the eastern seaboard appears to be dominated by zombies, this corpse cluster is bookended by small concentrations of the merely elderly in both Washington, D.C. and Cape Cod, Massachusetts.

Given our earlier finding of Cape Cod as being the highest concentration of “fun” in the United States, we’re not sure if this should be surprising. While many may not consider shuffleboard and iced tea to be the most fun things in the world, I believe we can find some general agreement on the fact that a zombie apocalypse is most certainly NOT fun. If it is a choice between spending a weekend with the undead or the old-fashioned, I think we’re all going to pick grandma and grandpa.

Ultimately it appears as if zombie hunters in the United States will be forced to use their best judgment, rather than the tools of spatial visualization, to determine who needs to be taken out in the event of the zombie apocalypse.

[1] No senior citizens were harmed in the making of this crass, terrible attempt at humor. Plus it was Mark’s idea. We also thought “confused people” might be mistaken for zombies as well but despite our expectations — and considerable evidence all around us in the material world — searches for for references to the phrase “confused people” in the geoweb did not produce many results.

[2] And it came to pass, when Israel had made an end of slaying all the zombies of Ai in the field, in the wilderness wherein they chased them, and when they were all fallen on the edge of the sword, until they were consumed, that all the Israelites returned unto Ai, and smote it with the edge of the sword. And so it was, that all that fell that day, both of male and female zombies, were twelve thousand, For Joshua drew not his hand back, wherewith he stretched out the spear, until he had utterly destroyed all the zombies of Ai and a good deal of the older and slower moving people as well. Book of Joshua, Chapter 8, versus 24-26

[3] The lack of cognitive abilities on the part of zombies does make this theory somewhat less plausible. But when you’re talking about the zombie apocalypse, you can never be too careful.

[4] Or, perhaps if we had also done a search on “stoned people”, the pattern would be different.