Skip down to main content
Published on
11 Jan 2013
Written by
Mark Graham
Have you ever wondered where Premier League football teams draw most of their support from? Or what the geography of fandom is? We have too, and set about to better understand how Premiership teams are reflected in Twitter usage across the UK.
The Floatingsheep team, with the help of two researchers from the Oxford Internet Institute – Joshua Melville and Scott A. Hale (both of whom did most of the work) – have created a neat interactive map for you to both explore the geography of Twitter mentions of specific teams, and let you explore the patterns of five key rivalries. Click on the screenshot below to be brought to the full interactive map. 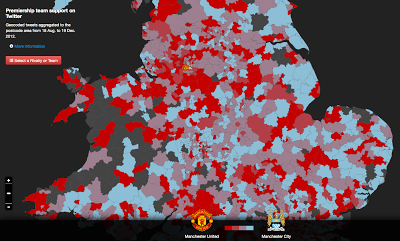 The data used include all geotagged tweets mentioning any of the Premiership football teams and their associated hashtags (e.g., #MUFC or #YNWA) that were sent between August 18 and December 19, 2012. We have only included one tweet per user to prevent ‘loud’ fans from skewing the results. The users were then aggregated to postcode districts in order to see a fairly fine-grained geography of results. The number of tweeters per district is normalized by the total ‘population’ of Twitter users based on a 0.25% random sample of all tweets within the UK.

What do the data show us, you ask? In Manchester, for instance, there is the oft-repeated stereotype that Manchester City are the ‘real’ local team, while Manchester United attract support from further afield. Our map doesn’t really support that idea though. There are only a few parts of Greater Manchester in which we see significant more tweets mentioning Manchester City than their local rivals. We also, strangely, see more mentions of Manchester City in Scotland and Merseyside, and more support for Manchester United in Northern Ireland.

The Merseyside rivalry (Liverpool vs. Everton) is another interesting one to map. There we see that Liverpool have the slight edge in the postcode that is home to both team’s stadiums. However, there is no clear winner in the rest of the region: with most postcodes having a fairly close split between the two teams. Interestingly, many postcodes in Scotland seem to have more mentions of Everton; while many in Northern Ireland have more mentions of Liverpool.

We can also zoom into particular postcodes and see which teams are most mentioned there. The  academics in Oxford (for some strange reason) mention Manchester City more than any other team. Central Edinburgh (when not focusing on Hearts or Hibs) has more mentions of Everton than any other Club. And the Queen’s home of SW1A goes for West Ham.

What about maybe the most important question of all. Who wins the league based on total number of Tweets sent from anywhere in the UK? The answer is Liverpool (a team that hasn’t won the actual league since 1990).  Manchester United are a somewhat distant second, joined by Everton and Tottenham in the Champions League spots. We also find out that Fulham, Swansea, and Wigan are the three teams that get relegated due to their quite abysmal scores. Apparently just not that many people want to tweet about Wigan. 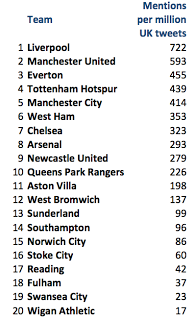 There is no doubt that using Tweets as a proxy for fandom is messy and not always reliable. In other words, we are mapping mentions and not measuring sentiment. But, the data do give us a rough sense of who is interested in (or at least talking about what), and where they are doing it from. It allows to begin to counter myths (e.g. that Mancunians don’t support Manchester United), develop new insights about places that we don’t necessarily have good data about, and most importantly, have some guesses as to which team the Queen might support.

See also:
A broader take on how information augments place (a second paper on the topic can be accessed here)
Other examples of our Twitter mapping (racism, flooding, earthquakes)
The code behind this visualisation (made freely [CC-BY-NC-SA] available on Github)