Digital communication technologies are altering the interface between policy makers and social movements. Anastasia Kavada, Senior Lecturer at the University of Westminster, and Guest Editor (with Andrea Calderaro from the European University Institute) of the Special issue on “Online Collective action and Policy Change“, provides an introduction to the papers published in this issue, noting that the internet constitutes both a tool and an object of activism and policymaking. 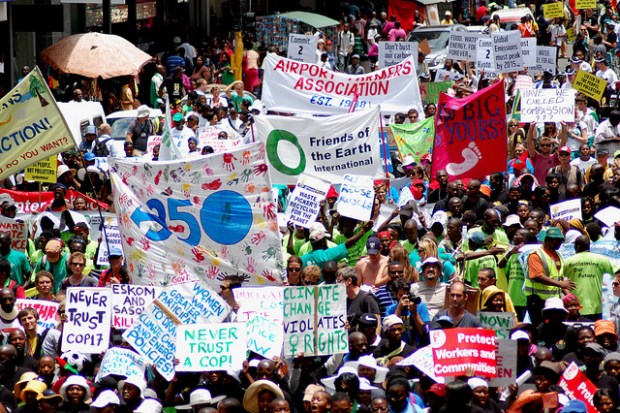 The Internet has multiplied the platforms available to influence public opinion and policy making. It has also provided citizens with a greater capacity for coordination and mobilisation, which can strengthen their voice and representation in the policy agenda. As waves of protest sweep both authoritarian regimes and liberal democracies, this rapidly developing field calls for more detailed enquiry. However, research exploring the relationship between online mobilisation and policy change is still limited. This special issue of ‘Policy and Internet’ addresses this gap through a variety of perspectives. Contributions to this issue view the Internet both as a tool that allows citizens to influence policy making, and as an object of new policies and regulations, such as data retention, privacy, and copyright laws, around which citizens are mobilising. Together, these articles offer a comprehensive empirical account of the interface between online collective action and policy making.

Within this framework, the first article in this issue, “Networked Collective Action and the Institutionalized Policy Debate: Bringing Cyberactivism to the Policy Arena?” by Stefania Milan and Arne Hintz (2013), looks at the Internet as both a tool of collective action and an object of policy. The authors provide a comprehensive overview of how computer-mediated communication creates not only new forms of organisational structure for collective action, but also new contentious policy fields. By focusing on what the authors define as ‘techie activists,’ Milan and Hintz explore how new grassroots actors participate in policy debates around the governance of the Internet at different levels. This article provides empirical evidence to what Kriesi et al. (1995) defines as “windows of opportunities” for collective action to contribute to the policy debate around this new space of contentious politics. Milan and Hintz demonstrate how this has happened from the first World Summit of Information Society (WSIS) in 2003 to more recent debates about Internet regulation.

Yana Breindl and François Briatte’s (2013) article “Digital Protest Skills and Online Activism Against Copyright Reform in France and the European Union” complements Milan and Hintz’s analysis by looking at how the regulation of copyright issues opens up new spaces of contentious politics. The authors compare how online and offline initiatives and campaigns in France around the “Droit d’Auteur et les Droits Voisins dans la Société de l’Information” (DADVSI) and “Haute Autorité pour la diffusion des œuvres et la protection des droits sure Internet” (HADOPI) laws, and in Europe around the Telecoms Package Reform, have contributed to the deliberations within the EU Parliament. They thus add to the rich debate on the contentious issues of intellectual property rights, demonstrating how collective action contributes to this debate at the European level.

The remaining articles in this special issue focus more on the online tactics and strategies of collective actors and the opportunities opened by the Internet for them to influence policy makers. In her article, “Activism and The Online Mediation Opportunity Structure: Attempts to Impact Global Climate Change Policies?” Julie Uldam (2013) discusses the tactics used by London-based environmental activists to influence policy making during the 17th UN climate conference (COP17) in 2011. Based on ethnographic research, Uldam traces the relationship between online modes of action and problem identification and demands. She also discusses the differences between radical and reformist activists in both their preferences for online action and their attitudes towards policy makers. Drawing on Cammaerts’ (2012) framework of the mediation opportunity structure, Uldam shows that radical activists preferred online tactics that aimed at disrupting the conference, since they viewed COP17 as representative of an unjust system. However, their lack of technical skills and resources prevented them from disrupting the conference in the virtual realm. Reformist activists, on the other hand, considered COP17 as a legitimate adversary, and attempted to influence its politics mainly through the diffusion of alternative information online.

The article by Ariadne Vromen and William Coleman (2013) “Online Campaigning Organizations and Storytelling Strategies: GetUp! Australia,” also investigates a climate change campaign but shifts the focus to the new ‘hybrid’ collective actors, who use the Internet extensively for campaigning. Based on a case study of GetUp!, Vromen and Coleman examine the storytelling strategies employed by the organisation in two separate campaigns, one around climate change, the other around mental health. The authors investigate the factors that led one campaign to be successful and the other to have limited resonance. They also skilfully highlight the difficulties encountered by new collective actors to gain legitimacy and influence policy making. In this respect, GetUp! used storytelling to set itself apart from traditional party-based politics and to emphasise its identity as an organiser and representative of grassroots communities, rather than as an insider lobbyist or disruptive protestor.

Romain Badouard and Laurence Monnoyer-Smith (2013), in their article “Hyperlinks as Political Resources: The European Commission Confronted with Online Activism,” explore some of the more structured ways in which citizens use online tools to engage with policy makers. They investigate the political opportunities offered by the e-participation and e-government platforms of the European Commission for activists wishing to make their voice heard in the European policy making sphere. They focus particularly on strategic uses of web technical resources and hyperlinks, which allows citizens to refine their proposals and thus increase their influence on European policy.

Finally, Jo Bates’ (2013) article “The Domestication of Open Government Data Advocacy in the UK: A Neo-Gramscian Analysis” provides a pertinent framework that facilitates our understanding of the policy challenges posed by the issue of open data. The digitisation of data offers new opportunities for increasing transparency; traditionally considered a fundamental public good. By focusing on the Open Data Government initiative in the UK, Bates explores the policy challenges generated by increasing transparency via new Internet platforms by applying the established theoretical instruments of Gramscian ‘Trasformismo.’ This article frames the open data debate in terms consistent with the literature on collective action, and provides empirical evidence as to how citizens have taken an active role in the debate on this issue, thereby challenging the policy debate on public transparency.

Taken together, these articles advance our understanding of the interface between online collective action and policy making. They introduce innovative theoretical frameworks and provide empirical evidence around the new forms of collective action, tactics, and contentious politics linked with the emergence of the Internet. If, as Melucci (1996) argues, contemporary social movements are sensors of new challenges within current societies, they can be an enriching resource for the policy debate arena. Gaining a better understanding of how the Internet might strengthen this process is a valuable line of enquiry.

Read the full article at: Calderaro, A. and Kavada A., (2013) “Challenges and Opportunities of Online Collective Action for Policy Change“, Policy and Internet 5(1).

Bates, J. 2013. The Domestication of Open Government Data Advocacy in the UK: A Neo-Gramscian Analysis. Policy and Internet 5(1).

Breindl, Y., and Briatte, F. 2013. Digital Protest Skills and Online Activism Against Copyright Reform in France and the European Union. Policy and Internet 5(1).

Kriesi, Hanspeter. 1995. “The Political Opportunity Structure of New Social Movements: its Impact on their Mobilization.” In The Politics of Social Protest, eds. J. Jenkins and B. Dermans. London: UCL Press, pp. 167–198.