Skip down to main content
Published on
22 Jun 2017
We are delighted to announce that the OII's Founding Donor, Dame Stephanie Shirley, has been appointed one of the 65 members of the Companions of Honour at the Queen's 2017 Birthday Honours, in recognition of her significant philanthropic endeavours.

We are delighted to announce that the OII’s Founding Donor, Dame Stephanie Shirley, has been appointed one of the 65 members of the Companions of Honour at the Queen’s 2017 Birthday Honours, in recognition of her significant philanthropic endeavours.

A highly successful entrepreneur turned ardent philanthropist, her charitable Shirley Foundation is now one of the top grant-giving foundations in the UK. A strong believer in business people giving back to society, she established the Shirley Foundation in 1986 with the primary aim of supporting pioneering projects in the field of autism spectrum disorders, with a particular emphasis on medical research. The Foundation also provided support for technology-related projects and it was her visionary support that enabled the founding of the Oxford Internet Institute with a major donation of over £10m.

OII Director, Prof. Helen Margetts, said “Stephanie Shirley is a truly remarkable person, and one we have been lucky enough to know and work with at the OII. Her ardent and lifelong commitment to the public good is reflected first in her contributions as a technology entrepreneur supporting the employment of women with dependents, and later in her extensive philanthropic endeavours — primarily in supporting medical research, but also as the OII’s Founding Donor, without whom we wouldn’t be here. Stephanie is an inspiration to us all — I’m confident everyone at the OII would like to join me in congratulating her on this well-deserved and fitting honour.”

In her TED talk: Why do ambitious women have flat heads? Stephanie Shirley explains why she goes by “Steve,” how she upended the expectations of the time when she founded her pioneering all-woman software company in the 1960s, and shares some sure-fire ways to identify ambitious women. 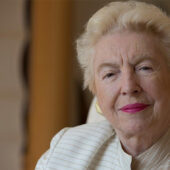