Skip down to main content
Published on
1 Aug 2004
The OII launches a pilot study to map the use of Wi-Fi for broadband Internet access in Oxfordshire, to investigate the potential for a grassroots global revolution in the provision of high-performance telecommunications infrastructure

The Oxford Internet Institute (OII) has launched a pilot study to map the use of Wireless Fidelity (Wi-Fi) for broadband Internet access in Oxfordshire. One of its key objectives is to investigate the potential for a grassroots global revolution in the provision of high-performance telecommunications infrastructure.

Sandvig believes that charting the evolution of rapidly-growing wireless networks will help to throw important light on the new uses of wireless Internet technology to supplement, and even replace, more traditional approaches to delivering phone calls and Internet services.

He explains: “Traditionally, telecommunications infrastructures have been viewed as large-scale projects that can come only from large companies like BT. But today, the proliferation of small, ad hoc efforts to establish broadband wireless networks are raising significant alternatives to centrally-driven telecoms. Recent industry reports estimate that there are over 42 million Wi-Fi users globally. Groups of Wi-Fi users across the world are banding together to provide their own services with the aim of lowering costs and barriers to access. Many feel let down by what is on offer from telecommunications companies.”

“By providing Internet connectivity without a capital-intensive infrastructure, this has profound policy and practical implications, for example in bringing broadband to developing countries and rural areas. If such ‘grassroots’ infrastructures prove viable in the longer term, it would prompt a reconsideration of contemporary legal, economic and social perspectives on communication infrastructure development.”

Wi-Fi, the focus of this new infrastructure, uses unlicensed radio spectrum and relatively easily-installed, compact and low-power equipment. The recent proliferation of cheap consumer equipment for wireless networking created a global market of $2.5 billion in 2003, giving a boost to the spread of publicly available Wi-Fi ‘hot spots’ in homes, cafés, neighbourhoods, business districts, airports, universities, rural communities and many other locations.

As part of the pilot study, researchers are creating maps of Wi-Fi activity by surveying selected areas in Oxfordshire with special equipment connected to palmtop computers. Continuing research at the OII on the use of wireless Internet will draw on Professor Sandvig’s work to produce findings about the uptake of new technologies and the use and regulation of the electromagnetic spectrum.

This collaborative research is based on work supported by the Higher Education Funding Council for England and the US National Science Foundation (under Grant No. IIS-0308269). Any opinions, findings and conclusions or recommendations expressed in this material are those of the authors and do not necessarily reflect the views of HEFCE or the NSF. 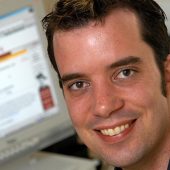 Christian Sandvig is an Assistant Professor of Speech Communication at the University of Illinois at Urbana-Champaign. He researches tensions between social, technical, and legal mechanisms of control in the development of communication technologies.