Skip down to main content
Published on
9 Nov 2012
OII Awards have today been awarded to Internet scholar Yochai Benkler, social entrepreneur Jennifer Pahlka, and the innovative non-profit Raspberry Pi, in recognition of their pivotal role in shaping today's Internet. 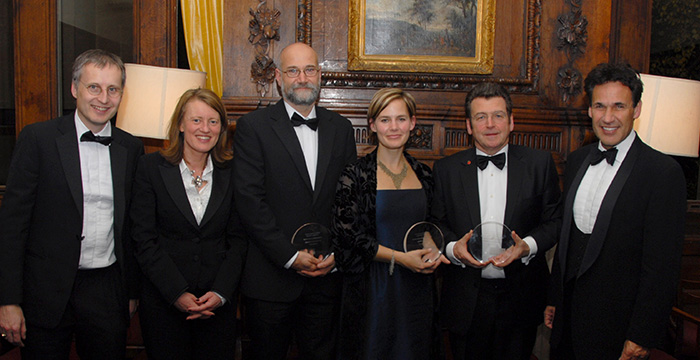 OII Awards have today been given to Internet scholar Yochai Benkler, social entrepreneur Jennifer Pahlka, and the innovative non-profit Raspberry Pi. The awards are intended to recognise publicly some of the individuals and organisations that have played a pivotal role in shaping the extraordinary ecosystem that is today’s Internet.

Yochai Benkler, Professor at Harvard Law School, and faculty Co-Director of the Berkman Center for Internet and Society, was given a “Lifetime Achievement” award in recognition of his extraordinary contribution to the study and public understanding of the Internet and information goods. Since the 1990s Yochai Benkler’s exceptional scholarship has focused on exploring the Internet’s potential to facilitate new forms of networked collaboration and peer-production. His extensive publications have documented the emergence and nature of ‘information goods’, and the contribution of decentralized collaboration to innovation, information production, and freedom in the networked society.

OII Director Professor Helen Margetts said: “The Lifetime awards are intended to recognise individuals who have played a uniquely significant and long-lasting role in shaping the Internet. Yochai Benkler is truly a “philosopher of the networked information society” and we are delighted to honour his extraordinary contribution to Internet scholarship.”

Two further awards were given in the “Internet and Society” category, which aim to recognise exemplary efforts in using the Internet for the public good in Britain and worldwide.

Jennifer Pahlka received an award in recognition of her contribution to digital open government in the US. After graduating from prestigious Yale University, Jennifer Pahlka made her mark in media for computer game developers, before in 2009 creating ‘Code for America’, which uses ‘geek’ volunteers to improve local government. This non-profit organization has enabled programmers and digital designers from industry to work with cities to open data and develop apps that reimagine the relationship between citizens and local government.

Viktor Mayer-Schoenberger, Professor of Internet Governance and Regulation at the OII, said: “It is a great honour to be able to present this award to Jen Pahlka, whose vision and actions have demonstrated so forcefully the ways in which the Internet can be harnessed to empower citizens and strengthen local democracy.”

The second award was given to the innovative non-profit foundation Raspberry Pi, who have developed an affordable, approachable pocket-sized computer that is already providing today’s children with unparalleled opportunities for learning to program. Digital computing and the Internet, with all the current emphasis on touch-screen visual cues and icons has for many become abstract and remote; with the advent of the Raspberry Pi we now have a credit-card sized computer we can hold in our hands and play with, reminding us of our capacity to tinker with technology, and the inherent mutability of the Internet itself.

Professor Helen Margetts said: “We are delighted to make this award to Raspberry Pi whose generous-spirited innovation will help to ensure that the next Internet generation comes to appreciate the satisfaction to be gained from digital making and tinkering.”

The awards were presented on 9 November 2012, at an awards dinner and ceremony held at Balliol College, Oxford. The OII Awards were launched in 2011 to mark the OII’s tenth anniversary year.