Using World Bank and ITU data we’ve drawn up the below map of mobile phone subscriptions per 100 people. You’ll see that unlike maps of internet penetration rates, there is not an obvious correlation between the wealth of a country and ICT usage. Some relatively poor countries like Ukraine and South Africa have over 100 subscriptions per every 100 people. In contrast, some wealthy countries like Canada and France have relatively low mobile subscription rates.

One of the most interesting facts that this map reveals is that despite the significant impacts that mobile phone has had in China and India (there are 1.5 billion mobile subscribers in both countries alone), there remain hundreds of millions of people in both countries that still lack access.

However, perhaps most eye-opening is just how many people do have access to mobiles. There are now over 5 billion mobile phone connections worldwide. While much work still needs to be done to connect those who desire connections, a majority of the world’s population have access to a tool that has been shown to make an enormous difference to how we communicate, interact, trade, play, love and learn. 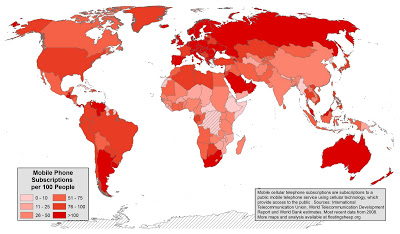