Before coming to the OII, I was a civic tech entrepreneur in Montreal (Canada), exploring to which extent new technologies could improve citizen participation. Despite my initial techno-enthusiasm, I progressively realised that I had quite misunderstood the democratic impact of digital technologies. So I started looking for a graduate program where I could both strengthen my technical skills and deepen my understanding of the societal impacts of ICTs.  The OII immediately stood out as a cutting-edge research department that would provide me with these skills.

A few months after graduating, I started working as a Policy Officer at the French Digital Council. This is an independent public body whose mission is to provide digital policy recommendations for the French Government and MPs. For over a year, I have been in charge of designing the roadmap of the government on the creation of a European Observatory of Online Platforms’ Behaviours, whose mission would be to inform evidence-based policies. I had to carry out three tasks simultaneously: flagging the most pressing issues reported by the digital ecosystem related to the misconduct of online platforms, assessing whether or not our current regulatory framework is sufficiently well-equipped, and highlighting where an observatory with strengthened competences would be useful. More recently, I have been involved in the drafting of the Villani’s report on Artificial Intelligence. This is the French national strategic roadmap on AI for the upcoming decades. Specifically, I have co-written chapter 5 “What Ethics for AI?”. The report was published in April 2018.

Digital policy is a great but challenging field. Within the span of a week, I could move from drafting a report on competition policy reform in the EU, to attending a workshop on algorithmic accountability or giving a presentation on the GDPR. Tackling such a wide variety of topics requires truly multidisciplinary training. You need to understand the core characteristics of platform markers if you intend to determine whether an online platform operator has abused its market power to foreclose competition. Similarly, when it comes to algorithmic accountability, you need to grasp the legal and ethical implications of AI so as to design the right regulatory framework; and so forth. I got all these skills at the OII.

Look for organisations that you are interested in and within them for people who do the kind of job that you would like to do. Once it is done, contact them and ask for a short meeting. Sometimes, when you ask for advice, you actually get a job.

I mostly miss the college life. In the real world (outside of the Oxford bubble) you rarely get to talk with a mathematician, an anthropologist and an economist within the same day. There, that’s a daily routine. These diverse perspectives truly enrich your thinking.

Ideally, I will either be back in academia, or working as a foresight expert for a large firm! 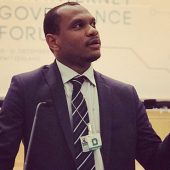 Lofred Madzou’s interests lie at the intersection of philosophy, artificial intelligence and policy. The overarching theme of his work is "responsible AI" and he works in collaboration with Philip Howard.