The rise of social networking tools, accompanied by the mass adoption of mobile devices, has strengthened the impact and broadened the reach of today’s political protests. OII researchers Sandra Gonzalez-Bailon and Ning Wang discuss their paper, ‘The Bridges and Brokers of Global Campaigns in the context of Social Media’, which investigates whether the ‘fluidity, horizontality and connectivity’ often claimed for online protest networks stands up to empirical scrutiny. 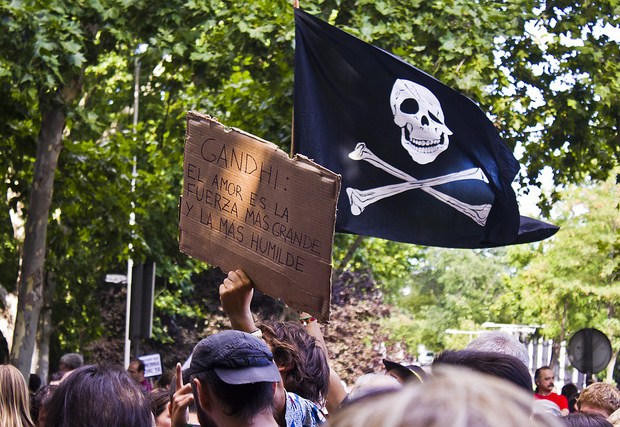 The Indignados march in Madrid, on 24 July 2011. Image by Gorefacio

How have online technologies reconfigured collective action? It is often assumed that the rise of social networking tools, accompanied by the mass adoption of mobile devices, have strengthened the impact and broadened the reach of today’s political protests. Enabling massive self-communication allows protesters to write their own interpretation of events – free from a mass media often seen as adversarial – and emerging protests may also benefit from the cheaper, faster transmission of information and more effective mobilization made possible by online tools such as Twitter.

The new networks of political protest, which harness these new online technologies are often described in theoretical terms as being ‘fluid’ and ‘horizontal’, in contrast to the rigid and hierarchical structure of earlier protest organization. Yet such theoretical assumptions have seldom been tested empirically. This new language of networks may be useful as a shorthand to describe protest dynamics, but does it accurately reflect how protest networks mediate communication and coordinate support?

The global protests against austerity and inequality which took place on May 12, 2012 provide an interesting case study to test the structure and strength of a transnational online protest movement. The ‘indignados’ movement emerged as a response to the Spanish government’s politics of austerity in the aftermath of the global financial crisis. The movement flared in May 2011, when hundreds of thousands of protesters marched in Spanish cities, and many set up camps ahead of municipal elections a week later.

These protests contributed to the emergence of the worldwide Occupy movement. After the original plan to occupy New York City’s financial district mobilised thousands of protesters in September 2011, the movement spread to other cities in the US and worldwide, including London and Frankfurt, before winding down as the camp sites were dismantled weeks later. Interest in these movements was revived, however, as the first anniversary of the ‘indignados’ protests approached in May 2012.

To test whether the fluidity, horizontality and connectivity often claimed for online protest networks holds true in reality, tweets referencing these protest movements during May 2012 were collected. These tweets were then classified as relating either to the ‘indignados’ or Occupy movement, using hashtags as a proxy for content. Many tweets, however, contained hashtags relevant for the two movements, creating bridges across the two streams of information. The users behind those bridges acted as  information ‘brokers’, and are fundamentally important to the global connectivity of the two movements: they joined the two streams of information and their audiences on Twitter. Once all the tweets were classified by content and author, it emerged that around 6.5% of all users posted at least one message relevant for the two movements by using hashtags from both sides jointly.

Analysis of the Twitter data shows that this small minority of ‘brokers’ play an important role connecting users to a network that would otherwise be disconnected. Brokers are significantly more active in the contribution of messages and more visible in the stream of information, being re-tweeted and mentioned more often than other users. The analysis also shows that these brokers play an important role in the global network, by helping to keep the network together and improving global connectivity. In a simulation, the removal of brokers fragmented the network faster than the removal of random users at the same rate.

What does this tell us about global networks of protest? Firstly, it is clear that global networks are more vulnerable and fragile than is often assumed. Only a small percentage of users disseminate information across transnational divides, and if any of these users cease to perform this role, they are difficult to immediately replace, thus limiting the assumed fluidity of such networks. The decentralized nature of online networks, with no central authority imposing order or even suggesting a common strategy, make the role of ‘brokers’ all the more vital to the survival of networks which cross national borders.

Secondly, the central role performed by brokers suggests that global networks of online protest lack the ‘horizontal’ structure that is often described in the literature. Talking about horizontal structures can be useful as shorthand to refer to decentralised organisations, but not to analyse the process by which these organisations materialise in communication networks. The distribution of users in those networks reveals a strong hierarchy in terms of connections and the ability to communicate effectively.

Future research into online networks, then, should keep in mind that the language of protest networks in the digital age, particularly terms like horizontality and fluidity, do not necessarily stand up to empirical scrutiny. The study of contentious politics in the digital age should be evaluated, first and foremost, through the lens of what protesters actually reveal through their actions.

Read the paper: Sandra Gonzalez-Bailon and Ning Wang (2013) The Bridges and Brokers of Global Campaigns in the Context of Social Media.