Skip down to main content
Published on
12 Nov 2012
Yochai Benkler, Professor at Harvard Law School, and faculty Co-Director of the Berkman Center for Internet & Society, has been awarded an OII Lifetime Achievement Award in recognition of his extraordinary contribution to the study of the Internet. 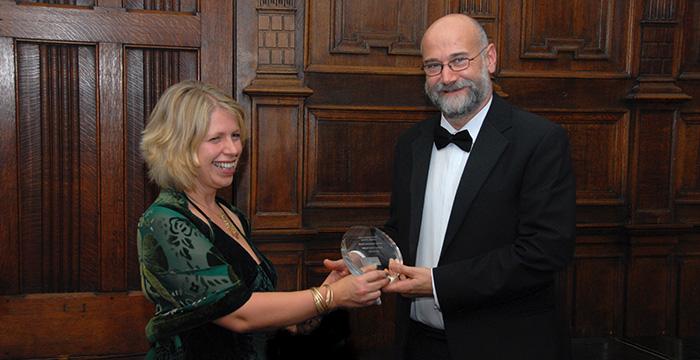 Yochai Benkler, Professor at Harvard Law School, and faculty Co-Director of the Berkman Center for Internet and Society, has been awarded an OII Lifetime Achievement Award in recognition of his extraordinary contribution to the study and public understanding of the Internet and information goods.

Yochai Benkler said: “The future of networked society, and in particular whether our lived experience of it will approximate its more liberating or more dystopian versions is still very much in the balance. I am deeply honoured and moved by this recognition of my personal contribution to the broad, collective effort that academic work has brought to bear to help us understand the stakes of the moment; to appreciate the basic human consequences that technical, political, regulatory, organizational and social decisions we make today will have in the coming decades.”

Since the 1990s Yochai Benkler’s exceptional scholarship has focused on exploring the Internet’s potential to facilitate new forms of networked collaboration and peer-production. His extensive publications have documented the emergence and nature of ‘information goods’, and the contribution of decentralized collaboration to innovation, information production, and freedom in the networked society. His books include the seminal text The Wealth of Networks: How social production transforms markets and freedom (Yale University Press 2006), which has provided the dominant theoretical framework for understanding the concept of the information commons and won academic awards from the American Political Science Association, the American Sociological Association, and the McGannon award for social and ethical relevance in communications. With the publication in 2011 of The Penguin and the Leviathan: How Cooperation Triumphs Over Self-Interest (Crown Business 2011), Benkler received recognition as a mainstream public intellectual for his multi-disciplinary study of the micro-foundations of cooperation and their integration into cooperative human systems design.

The award was presented on 9 November in Oxford, at an awards dinner and ceremony that also included Internet and Society Awards for Jennifer Pahlka and Raspberry Pi.

Professor Helen Margetts said: “The Lifetime awards are intended to recognise individuals who have played a uniquely significant and long-lasting role in shaping the Internet. Yochai Benkler is truly a “philosopher of the networked information society” and we are delighted to honour his extraordinary contribution to Internet scholarship.”

Yochai Benkler’s work is socially engaged, winning him the Ford Foundation Visionaries Award in 2011, the Electronic Frontier Foundation’s Pioneer Award for 2007, and Public Knowledge’s IP3 Award in 2006. It is also anchored in the realities of markets, having been cited as “perhaps the best work yet about the fast moving, enthusiast-driven Internet” by the Financial Times and named best business book about the future in 2006 by Strategy and Business. Benkler has produced reports or served in an advisory capacity for a range communications and intellectual property policy makers and regulators at the national and international levels. His work can be freely accessed at benkler.org.