With the summer months upon us, the FloatingSheep Collective is busy with travel and paper-writing and as a result, we’ve not been posting as much.

This will be changing over the next weeks as we are working on topics ranging from zombies to augmented reality to marijuana pricing to the interaction between material and virtual flows in the economy. We’ll be pushing some of this material out later in June and July.

We’re also continuing to work on the languages of the geoweb with specific case studies in a range of locations such as Belgium, the corridor between Toronto and Quebec, Kenya, the UAE, France, and Spain. This will likely start coming out in August and September. But to give an initial sense of what we’re finding, we offer the following look at languages in Europe…

We searched for the term “beer” in about 70 different languages — some native to Europe, others from around the world — to see what kind of patterns we could see. The map below shows the distribution of six languages that we selected to highlight the tight ties between online use of language and offline patterns.

The clustering of references corresponds very closely with the distribution of the speakers of each language, even languages that exist within a state with another dominant language. For example, Welsh appears within Wales but in few other places within the United Kingdom and Catalan is concentrated around Barcelona within Spain. The other interesting finding is that most languages have a micro-cluster of references to beer within Brussels. Whether this is due to the high quality of Belgian beer or the fact that the E.U. is headquartered there remains to be seen. 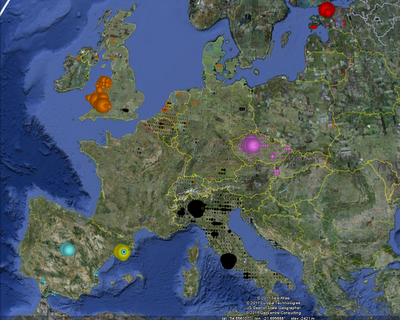 Note: The size of the circles are consistent within a language but should not be compared between languages. For example, there are many fewer references to beer (or anything) in Welsh than in Italian.
Search Terms for Beer Used in the Map Above 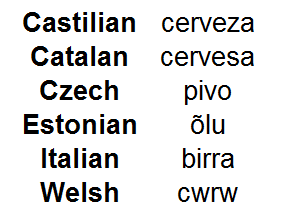