As part of our project on digital labour and development, Isis Hjorth, Mark Graham, Helena Barnard and I have been meeting and interviewing over a hundred people who do freelance work over the Internet, through platforms such as Upwork and Elance. One of the big impacts these platforms are expected to have on the economy is disintermediation: that buyers and sellers can do business directly, without companies and agencies in the middle. Gatekeepers disappear and hierarchies melt down into market-based one-to-one connections that can span the globe. This idea is sometimes referred to as the “peer-to-peer economy”. 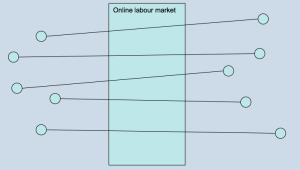 Our preliminary results suggest that disintermediation is indeed happening. People from Manila to Cape Town and Saigon to Nairobi work for over the Internet for clients all over the world. But we are finding that the story doesn’t end there: in many cases, new network patterns emerge to complicate the picture. Some contractors take work from a platform and then pass it right back into the platform at a lower rate, reintermediating it. Some pass online work to workers they have hired from the local labour market, lengthening the value chain locally. Others collaborate horizontally with family and friends to complete their projects. None of this is visible online: all you see on the platform are faces of individual contractors. But behind a face there is often a small network of people organized according to one of a variety of patterns.

“[E]verybody is trying to get a piece of the commission but they don’t want to do the hard work […] It has happened to me that my employer and I bidded on the same project. The employer gets awarded the project and it gets passed to me for a lower fee.” – female, 28, Malaysia

In the reintermediation pattern, a contractor who wins a job on a platform turns around and re-lists that job on the same platform with a lower reward. The actual work is thus done by a sub-contractor, but the contractor captures a slice of the revenue. Some contractors are able to do this because they have a very attractive profile on the platform, helping them to win projects. A long track record of successful projects and good reviews are very helpful in convincing clients. This “platform capital” allows successful contractors to insert themselves in the chain between clients and less qualified contractors. 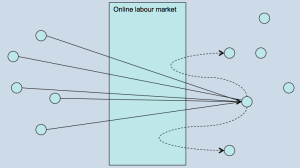 Reintermediation: a successful contractor passes work to subcontractors via the same platform

“I wear the proofreader’s hat, editor’s hat, whatever else that’s left and they [local subcontractors] do just the raw transcription. […] I look at myself as someone who is employing other people, training them to do ethical things.” – female, ~30, Philippines 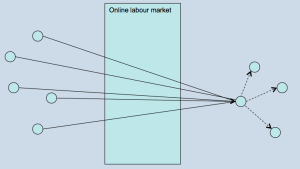 Besides simply benefiting from their information and access advantage, the contractors who perform local lengthening can be real managers who add lots of value to the process. They can take a large project from the online client, split it into smaller parts, find a suitable worker for each part, supervise each part, integrate the results into a final deliverable, and ensure timely delivery. Though platforms reduce information and coordination costs, they don’t eliminate these costs completely, meaning that small hierarchies can still often be more efficient than purely one-to-one market relationships.

“Sometimes I can’t work, like I’m busy maybe I’ve gone upcountry and stuff like that, I leave him my account, he’s able to manage it and communicate with clients and go on. […] We have become like brothers because of this […]” – female, 37, Kenya

Under the horizontal collaboration pattern, we placed a variety of non-market relationships between online workers and their family and friends. In some cases, family members worked on online projects together and shared the income. For example, the face appearing in one online profile belonged to a lady with attractive features and good language skills, while much of the production work was actually performed by her little sister. In other cases, friends who both had a profile in the platform (or in different platforms) sent each other work without money changing hands. The key point here is the use of social capital developed outside work to establish and maintain mutually beneficial economic relationships; so-called multiplex ties. 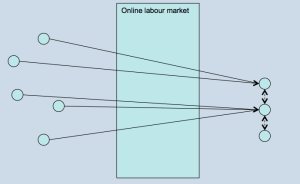 These are just preliminary findings. Our empirical research and especially the analysis of the findings is still very much ongoing. But some things are already clear. While digital platforms can disintermediate economic relationships and deconstruct old hierarchies, that’s not the end of the story. New structures of hierarchy and collaboration can emerge both at the edges of the platforms (as in local lengthening and horizontal collaboration) as well as inside the platforms themselves (as in reintermediation). These structures can be responses to the information and coordination costs that still remain, but some are also responses to the new incentive structures that the platforms themselves inadvertently create, like the value of 5-star ratings. We will continue to study what these patterns are, why they arise, and what impacts they have on the nature of work and everyday life.

We are presenting these preliminary findings at the American Sociological Association’s Annual Meeting in Chicago this Sunday at 8:30am. You can download the paper here:

You may also be interested in some of the quantitative work that we are doing in this project, on topics such as contractor earnings, geographic flows and game labour. Also, we are hiring.