For our inaugural discussion around “connectivity and inequality and inclusion” we decided to jump in the deep end and tackle the 600+ pages of Piketty’s much hyped “Capital in the Twenty First Century”.

Undoubtedly this work tackles important historical accounts of the distribution of wealth and the evolution of income across a number of Western countries since the early industrial revolution. However, we wanted to also probe how these portrayals of inequality relate to questions of technology and connectivity – and their significance in this.

One of Piketty’s main arguments can best be coined through reference to his simple macroeconomic equation r > g. Piketty argues that inequality increases when the return on capital (r) exceeds the rate of economic growth (g) in society. Drawing on analyses of tax and estate tax return data, and illustrating his points with references to popular fictional characters of Austin and Balzac novels, he argues that contemporary and future society is in risk of returning to inequality levels of previous centuries.

A key risk is that in the future, existing wealth will continuously accumulate much faster than growth. Why is this important? Because when return on capital exceeds growth then in general society becomes more unequal. The rich will inherit wealth which provides income whilst those underneath will not be able to catch up through riding on the growth of economies. Ultimately, Piketty argues, this will undermine the democratic values underpinning society.

Drawing on a long-run historical perspective, Piketty’s argument is that the increase in equality in the mid-20st century was a meritocratic “abnormality” linked to the fallout of the world wars, subsequent redistributions, and of demographic explosions. As such, he challenges the idea of the Kutznets Curve. But, Piketty argues that these conditions fostering lower inequality are coming to an end, not least in the US and Europe, with demographic slowdown and slower growth.

We had a number of debates relating to the kind of data Piketty draws on and problems arising from combining such homogeneous datasets. In the wake of the Financial Times vs. Piketty debate, we discussed some of Piketty’s figures, particularly those presented in Chapter 10. Our resident economist Grant highlighted certain points of contention in Piketty’s data, particularly around the numbers reported on UK inequality over the previous decades (and seeming divergence from the generally peer accepted “Atkinson’s model”) as well as US inequality (seemingly based on figures that are renowned to be questionable amongst economists).

Of course, these debates of data are only a narrow part of a wide ranging and comprehensive narrative, and I argued that his wider thesis should not be discounted based upon a few debatable data points. But, what it perhaps highlights is that future work will need to be done – improving how inequality data is collected, triangulating the predominantly tax and estate return data with wider statistics and updating models as more recent data becomes available – to expand and see how Piketty’s thesis plays out. Indeed, this book is notable in that all the data and calculations have been shared online, providing the ability for others to explore and extend his arguments.

For those of us who come to such work from a technological perspective there is surprisingly little meat to chew on. Implicitly we might read the high g, the economic growth in the past century to have come from the radical mechanisation and information developments. But, this effect is seen as declining as part of the declining g. So, this position questions the centrality often placed on innovation and technology. Indeed modern transformations of society, from the growth of internet, to high speed computing and other technologies are almost ignored and this needs more explanation.

Linked to this, Piketty’s study is primarily at a national level. He does include a number of discussions around how these link to global flows of capital, but at the end of the day these take a back seat to national processes as the key units of his analyses. This was considered contentious, for those of us who research global processes. What of the growing cross-national links, networks of production, tax havens and financial flows? It is difficult to be convinced of a narrative where these processes which some of us see as central in the modern world were effectively sidelined.

What we did take from this work, is that it provides a powerful reminder on how unequal society is. See two figures taken from the book below. For me the figures presented here are astonishing, and highlight contrasting societal level. Inequality at the top 10% and 1% needs to be considers, and this is often overlooked in research analysis which is often fixated on comparatively small redistributions between the bottom 10 or 20%. Further, Piketty’s approach through existing quantitative data, performing longitudinal/time series analysis and sharing data and methods, should remind us of the power of such collection and analysis in our work. 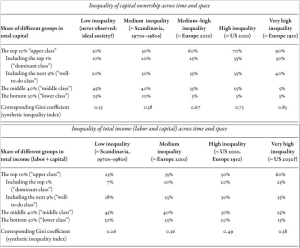 So, inequality is back at the top of the research agenda, now there is a need to link this back and articulate the technology revolutions, globalisation that seem to be missing (and expanded analysis on developing countries).

Thanks to Isis for organising the discussion and correcting the article for accuracy, and to the group for provide inputs for this entry