Policy and Internet author Steve Stottlemyre discusses how users of online social networks took the initiative in collecting and processing data for use in the rebellion against the Qadhafi regime during the Libyan civil war of February-October 2011. He describes how some of the information crowd-sourced by crisis mappers – whether they knew it or not – met the minimum requirements to be considered tactical military intelligence, in accordance with U.S. joint military intelligence doctrine. 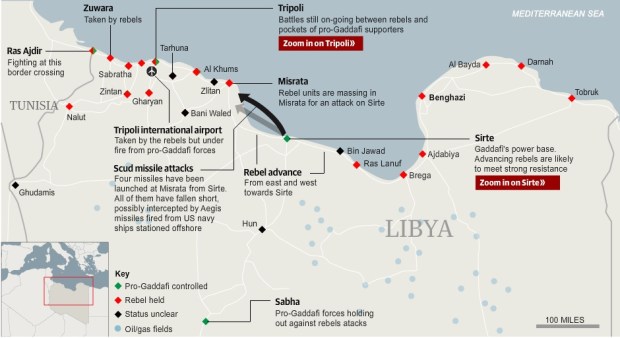 Protesters in Libya called for their own ‘day of rage’ on February 17, 2011, marked by violent protests in several major cities, including the capitol Tripoli. As they transformed from ‘protestors’ to ‘Opposition forces’ they began pushing information onto Twitter, Facebook, and YouTube, reporting their firsthand experiences of what had turned into a civil war virtually overnight. The evolving humanitarian crisis prompted the United Nations to request the creation of the Libya Crisis Map, which was made public on March 6, 2011. Other, more focused crisis maps followed, and were widely distributed on Twitter.

It was clear from the beginning of the Libyan civil war that very few people knew exactly what was happening on the ground. Even NATO, according to one of the organization’s spokesmen, lacked the ground-level informants necessary to get a full picture of the situation in Libya. There is no public information about the extent to which military commanders used information from crisis maps during the Libyan civil war. According to one NATO official, “Any military campaign relies on something that we call ‘fused information’. So we will take information from every source we can… We’ll get information from open source on the internet, we’ll get Twitter, you name any source of media and our fusion centre will deliver all of that into useable intelligence.”

The data in these crisis maps came from a variety of sources, including journalists, official press releases, and civilians on the ground who updated blogs and/or maintaining telephone contact. The @feb17voices Twitter feed (translated into English and used to support the creation of The Guardian’s and the UN’s Libya Crisis Map) included accounts of live phone calls from people on the ground in areas where the Internet was blocked, and where there was little or no media coverage. Twitter users began compiling data and information; they tweeted and retweeted data they collected, information they filtered and processed, and their own requests for specific data and clarifications.

Information from various Twitter feeds was then published in detailed maps of major events that contained information pertinent to military and humanitarian operations. For example, as fighting intensified, @LibyaMap’s updates began to provide a general picture of the battlefield, including specific, sourced intelligence about the progress of fighting, humanitarian and supply needs, and the success of some NATO missions. Although it did not explicitly state its purpose as spreading mission-relevant intelligence, the nature of the information renders alternative motivations highly unlikely.

Interestingly, the Twitter users featured in a June 2011 article by the Guardian had already explicitly expressed their intention of affecting military outcomes in Libya by providing NATO forces with specific geographical coordinates to target Qadhafi regime forces. We could speculate at this point about the extent to which the Intelligence Community might have guided Twitter users to participate in the intelligence process; while NATO and the Libyan Opposition issued no explicit intelligence requirements to the public, they tweeted stories about social network users trying to help NATO, likely leading their online supporters to draw their own conclusions.

It appears from similar maps created during the ongoing uprisings in Syria that the creation of finished intelligence products by crisis mappers may become a regular occurrence. Future study should focus on determining the motivations of mappers for collecting, processing, and distributing intelligence, particularly as a better understanding of their motivations could inform research on the ethics of crisis mapping. It is reasonable to believe that some (or possibly many) crisis mappers would be averse to their efforts being used by military commanders to target “enemy” forces and infrastructure.

Indeed, some are already questioning the direction of crisis mapping in the absence of professional oversight (Global Brief 2011): “[If] crisis mappers do not develop a set of best practices and shared ethical standards, they will not only lose the trust of the populations that they seek to serve and the policymakers that they seek to influence, but (…) they could unwittingly increase the number of civilians being hurt, arrested or even killed without knowing that they are in fact doing so.”