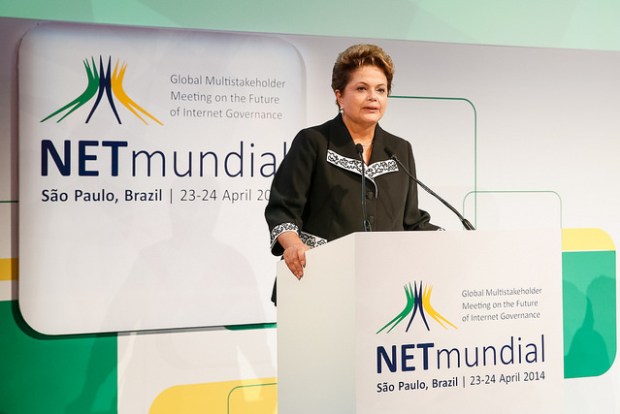 Dilma Rouseff during the opening ceremony of the Global Stakeholder Meeting on the Future of Internet Governance: NETmundial. Image: Blog do Planalto (Flickr).

What are the linkages between multistakeholder governance and crowdsourcing? Both are new — trendy, if you will — approaches to governance premised on the potential of collective wisdom, bringing together diverse groups in policy-shaping processes. Their interlinkage has remained underexplored so far. Our article recently published in Policy and Internet sought to investigate this in the context of Internet governance, in order to assess the extent to which crowdsourcing represents an emerging opportunity of participation in global public policymaking.

We examined two recent Internet governance initiatives which incorporated crowdsourcing with mixed results: the first one, the ICANN Strategy Panel on Multistakeholder Innovation, received only limited support from the online community; the second, NETmundial, had a significant number of online inputs from global stakeholders who had the opportunity to engage using a platform for political participation specifically set up for the drafting of the outcome document. The study builds on these two cases to evaluate how crowdsourcing was used as a form of public consultation aimed at bringing the online voice of the “undefined many” (as opposed to the “elected few”) into Internet governance processes.

From the two cases, it emerged that the design of the consultation processes conducted via crowdsourcing platforms is key in overcoming barriers of participation. For instance, in the NETmundial process, the ability to submit comments and participate remotely via www.netmundial.br attracted inputs from all over the world very early on, since the preparatory phase of the meeting. In addition, substantial public engagement was obtained from the local community in the drafting of the outcome document, through a platform for political participation — www.participa.br — that gathered comments in Portuguese. In contrast, the outreach efforts of the ICANN Strategy Panel on Multistakeholder Innovation remained limited; the crowdsourcing platform they used only gathered input (exclusively in English) from a small group of people, insufficient to attribute to online public input a significant role in the reform of ICANN’s multistakeholder processes.

Second, questions around how crowdsourcing should and could be used effectively to enhance the legitimacy of decision-making processes in Internet governance remain unanswered. A proper institutional setting that recognizes a role for online multistakeholder participation is yet to be defined; in its absence, the initiatives we examined present a set of procedural limitations. For instance, in the NETmundial case, the Executive Multistakeholder Committee, in charge of drafting an outcome document to be discussed during the meeting based on the analysis of online contributions, favoured more “mainstream” and “uncontroversial” contributions. Additionally, online deliberation mechanisms for different propositions put forward by a High-Level Multistakeholder Committee, which commented on the initial draft, were not in place.

With regard to ICANN, online consultations have been used on a regular basis since its creation in 1998. Its target audience is the “ICANN community,” a group of stakeholders that volunteer their time and expertise to improve policy processes within the organization. Despite the effort, initiatives such as the 2000 global election for the new At-Large Directors have revealed difficulties in reaching as broad of an audience as wanted. Our study discusses some of the obstacles of the implementation of this ambitious initiative, including limited information and awareness about the At-Large elections, and low Internet access and use in most developing countries, particularly in Africa and Latin America.

Third, there is a need for clear rules regarding the way in which contributions are evaluated in crowdsourcing efforts. When the deliberating body (or committee) is free to disregard inputs without providing any motivation, it triggers concerns about the broader transnational governance framework in which we operate, as there is no election of those few who end up determining which parts of the contributions should be reflected in the outcome document. To avoid the agency problem arising from the lack of accountability over the incorporation of inputs, it is important that crowdsourcing attempts pay particular attention to designing a clear and comprehensive assessment process.

The “wisdom of the crowd” has traditionally been explored in developing the Internet, yet it remains a contested ground when it comes to its governance. In multistakeholder set-ups, the diversity of voices and the collection of ideas and input from as many actors as possible — via online means — represent a desideratum, rather than a reality. In our exploration of empowerment through online crowdsourcing for institutional reform, we identify three fundamental preconditions: first, the existence of sufficient community interest, able to leverage wide expertise beyond a purely technical discussion; second, the existence of procedures for the collection and screening of inputs, streamlining certain ideas considered for implementation; and third, commitment to institutionalizing the procedures, especially by clearly defining the rules according to which feedback is incorporated and circumvention is avoided.

Roxana Radu is a PhD candidate in International Relations at the Graduate Institute of International and Development Studies in Geneva and a fellow at the Center for Media, Data and Society, Central European University (Budapest). Her current research explores the negotiation of internet policy-making in global and regional frameworks.

Nicolo Zingales is an assistant professor at Tilburg law school, a senior member of the Tilburg Law and Economics Center (TILEC), and a research associate of the Tilburg Institute for Law, Technology and Society (TILT). He researches on various aspects of Internet governance and regulation, including multistakeholder processes, data-driven innovation and the role of online intermediaries.

Enrico Calandro (PhD) is a senior research fellow at Research ICT Africa, an ICT policy think-tank based based in Cape Town. His academic research focuses on accessibility and affordability of ICT, broadband policy, and internet governance issues from an African perspective.