This post is by Frank Hangler and Gili Vidan, and is adapted from a post on Frank’s personal blog.

For Open Data Hack Day in Oxford, we decided to play around with data from the International Broadband Pricing Study released last year by Google. We decided to look at mobile broadband prices around the world: in which countries can you obtain data on your mobile device for the least money, relative to your purchasing power in that country?

The study collects information on consumer mobile plans sold by major carriers in each country, so we had to do some data aggregation first. Initially, we took all the available data plans in each country and took the average price per gigabyte. However, we noticed some significant outliers, which in turn led to some bizarrely high prices, such as $1200/GB for mobile data in Turkey! The final map shows the cheapest possible price per gigabyte of mobile data. (Of course, there are problems with this approach, too; it’s probably not reflective of what the typical consumer is paying each month.) We separated the cases into quintiles, and colour-coded countries according to which price range they landed in. Countries for which no data was available are coloured grey. Click on the image (or here) for the interactive version, which might take a moment to load. 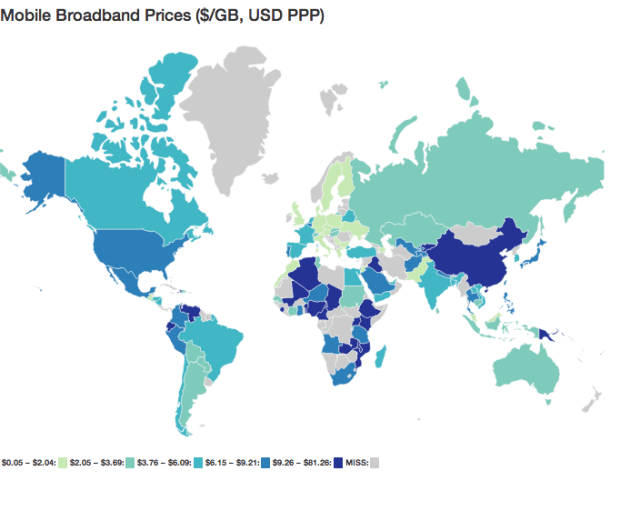 The results are perhaps not too surprising: the cheapest mobile broadband tends to be found in the developed world, especially Scandinavia and Central Europe. (The reverse pattern does not hold, though: there are plenty of developed countries, including the United States, where mobile broadband is not particularly cheap.) The most expensive countries are scattered around the world, but there is a definite concentration in Africa. The single most expensive country in the world is Cameroon, with the cheapest mobile data plan costing $81.26 per gigabyte!

While cost per gigabyte is not the only barrier in increasing mobile Internet access (a lot of the service packages the dataset includes have partial coverage and are only available to users in urban areas), it is a powerful indicator of how precious mobile data services still are in certain places. So while service providers and phone makers target the “next billion,” the actual cost of data usage must factor into their investment schemes and the development of light applications. Perhaps this is one step towards explaining the mass success of WhatsApp, recently purchased by Facebook for $19B. If an application enables those who cannot afford mobile broadband to still enjoy the benefits of connectivity, investing heavily in that application might not seem such an absurd shopping spree.

The (messy!) code is on GitHub here. Please feel free to get in touch with any questions, feedback, or suggestions. Finally, you can check out some of the other participants’ projects here. Thanks to the organizers for arranging an excellent day of hacking!