The data were collected using Python to access the Twitter API. The most active account affiliated with each college was selected, and the most recent 100 tweets from each were downloaded. At first glance, no discernible pattern emerged from my data; age of college, past gender specificity, admittance of undergraduates, and size of endowment do not appear to play play a significant role in college Twitter relationships. The visualisation does seem to reveal a density of tweets among colleges that are more centrally located, but this could be deceptive because the central nodes are more closely concentrated, and edges that pass through the centre give an appearance of central density. 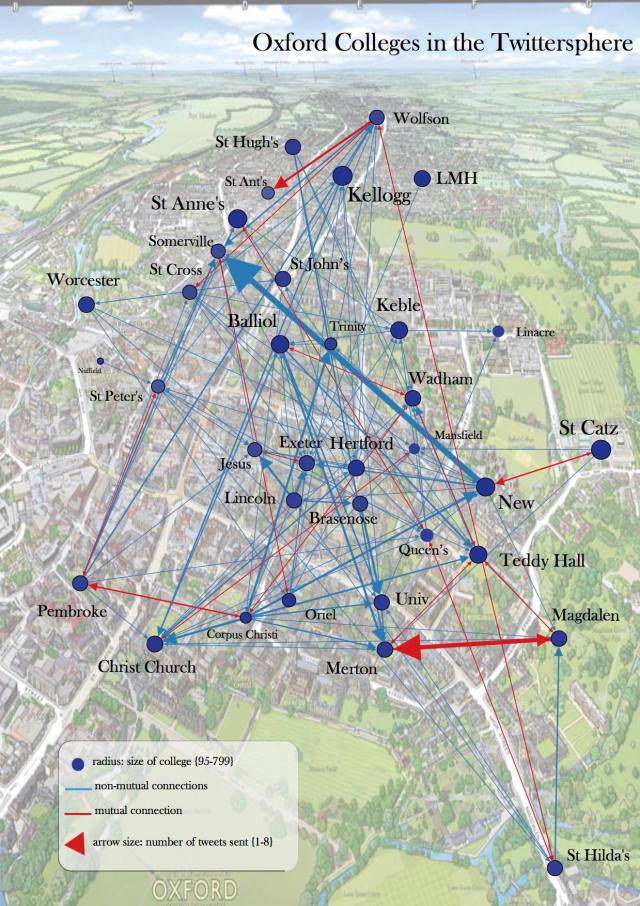 Many of the mutual ties appear between colleges that are relatively near one another: Teddy Hall, Magdalen and Merton all share mutual tweets, as do Jesus and Exeter colleges, New and St. Catherine’s, St. Cross and Somerville. However, proximity cannot be said to be a predictor of mutual ties, as many very close colleges do not reciprocate tweets—indeed, many very close colleges do not tweet one another at all (i.e. New and Teddy Hall, Nuffield and Worcester, Kellogg and LMH). Indeed, rather than revealing any definitive pattern, this visualisation reveals the unpredictability of mutual Twitter ties based on geographic proximity of colleges.

One effect visible in some of the more outlying colleges is a general lack of engagement with the more central ones. For instance, Nuffield — the smallest college by far, with just 95 students — sent only one tweet, directed at its closest neighbour, St. Peter’s College. Northerly LMH sent only one tweet, and similarly isolated Linacre sent none. However, this effect was certainly not a rule—St. Hilda’s, the southernmost college, sent six tweets; Wolfson, the northernmost, sent nine. And conversely, centrally located Trinity College sent just one tweet to its neighbour Balliol.

Additionally, the visualisation reveals that the majority of ties between college are uni-directional rather than mutual, indicating that social capital does not flow evenly between colleges. Some, like Corpus Christi, might send twenty-one tweets to others and receive only three in return. Others, like Merton, may send only four tweets but receive eighteen back. This debunks the notion of social capital popularized by Putnam,[1] and challenges the idea that “participation begets future participation”.[2] Rather, it seems that the number of tweets an account sends out is relatively unrelated to the number of tweets an account receives.

Moreover, some of the most ‘sociable’ colleges (those that send the most tweets) concentrate their recipients to a select few; Magdalen sent eight tweets to only three different colleges. This could indicate greater prioritization of close ties than the strategy of colleges like St. Peters, who sent eight tweets to eight different colleges. Again, these differing strategies seem to have little bearing on how many tweets a college receives; though New College tweeted at Somerville College eight times, they did not receive any responses from the official Somerville account.

This visualisation perhaps most forcefully conveys the multitude of factors that could influence Twitter activity which are either not publicly available or not quantifiable. These could include the time and budget available to the person running the Twitter account, or the more nebulous personality traits that may help or hinder their capacity to build relationships with other colleges. Different colleges may also have different dispositions towards the importance of engaging with other colleges, or different historical relationships (like the rivalry between Jesus and Exeter) that would be difficult to quantify and visually illustrate.

Oxford colleges make for an interesting case study of how relationships between independent states or institutions develop in a federation. Investigating what ties particular affiliates together, why some might participate more or less in the broader community, and what quantifiable factors can predict sociability might allow us to create exportable models that can be applied to other federations. By looking closely at reciprocity, this visualisation could reveal how social capital flows between dyads or triads of peer institutions, or more broadly within a larger federal system of peers.