What are the limitations of learning at scale? Investigating information diffusion and network vulnerability in MOOCs 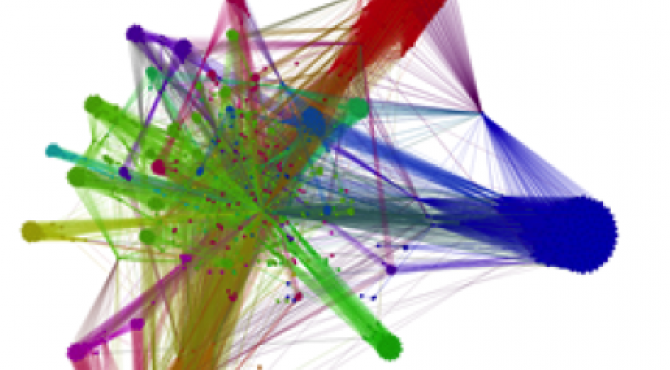 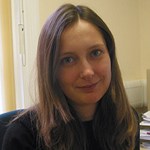 Despite the speculation about the role massively open online courses (MOOCs) may play in higher education, empirical research that explores the realities of interacting and learning in MOOCs is in its infancy. Rebecca Eynon, PI of an OII project on Conceptualising interaction and learning in MOOCs discusses how her analysis (with Nabeel Gillani, Taha Yasseri, and Isis Hjorth) of nearly 87,000 individuals from one MOOC helps us to understand the ways that learners interact in these settings. Full paper: Gillani, N., Yasseri, T., Eynon, R., and Hjorth, I. (2014) Structural limitations of learning in a crowd – communication vulnerability and information diffusion in MOOCs. Scientific Reports 4.

Millions of people worldwide are currently enrolled in courses provided on large-scale learning platforms (aka ‘MOOCs’), typically collaborating in online discussion forums with thousands of peers. Current learning theory emphasizes the importance of this group interaction for cognition. However, while a lot is known about the mechanics of group learning in smaller and traditionally organized online classrooms, fewer studies have examined participant interactions when learning “at scale”. Some studies have used clickstream data to trace participant behaviour; even predicting dropouts based on their engagement patterns. However, many questions remain about the characteristics of group interactions in these courses, highlighting the need to understand whether — and how — MOOCs allow for deep and meaningful learning by facilitating significant interactions.

But what constitutes a “significant” learning interaction? In large-scale MOOC forums, with socio-culturally diverse learners with different motivations for participating, this is a non-trivial problem. MOOCs are best defined as “non-formal” learning spaces, where learners pick and choose how (and if) they interact. This kind of group membership, together with the short-term nature of these courses, means that relatively weak inter-personal relationships are likely. Many of the tens of thousands of interactions in the forum may have little relevance to the learning process. So can we actually define the underlying network of significant interactions? Only once we have done this can we explore firstly how information flows through the forums, and secondly the robustness of those interaction networks: in short, the effectiveness of the platform design for supporting group learning at scale.

To explore these questions, we analysed data from 167,000 students registered on two business MOOCs offered on the Coursera platform. Almost 8000 students contributed around 30,000 discussion posts over the six weeks of the courses; almost 30,000 students viewed at least one discussion thread, totalling 321,769 discussion thread views. We first modelled these communications as a social network, with nodes representing students who posted in the discussion forums, and edges (ie links) indicating co-participation in at least one discussion thread. Of course, not all links will be equally important: many exchanges will be trivial (‘hello’, ‘thanks’ etc.). Our task, then, was to derive a “true” network of meaningful student interactions (ie iterative, consistent dialogue) by filtering out those links generated by random encounters (Figure 1; see also full paper for methodology). 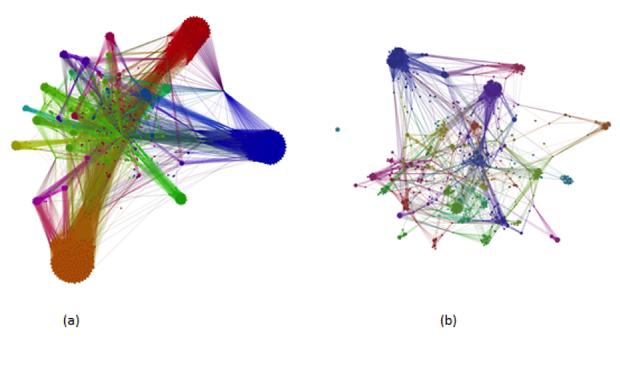 Figure 1. Comparison of observed (a; ‘all interactions’) and filtered (b; ‘significant interactions’) communication networks for a MOOC forum. Filtering affects network properties such as modularity score (ie degree of clustering). Colours correspond to the automatically detected interest communities.

One feature of networks that has been studied in many disciplines is their vulnerability to fragmentation when nodes are removed (the Internet, for example, emerged from US Army research aiming to develop a disruption-resistant network for critical communications). While we aren’t interested in the effect of missile strike on MOOC exchanges, from an educational perspective it is still useful to ask which “critical set” of learners is mostly responsible for information flow in a communication network — and what would happen to online discussions if these learners were removed. To our knowledge, this is the first time vulnerability of communication networks has been explored in an educational setting.

Network vulnerability is interesting because it indicates how integrated and inclusive the communication flow is. Discussion forums with fleeting participation will have only a very few vocal participants: removing these people from the network will markedly reduce the information flow between the other participants — as the network falls apart, it simply becomes more difficult for information to travel across it via linked nodes. Conversely, forums that encourage repeated engagement and in-depth discussion among participants will have a larger ‘critical set’, with discussion distributed across a wide range of learners.

To understand the structure of group communication in the two courses, we looked at how quickly our modelled communication network fell apart when: (a) the most central nodes were iteratively disconnected (Figure 2; blue), compared with when (b) nodes were removed at random (ie the ‘neutral’ case; green). In the random case, the network degrades evenly, as expected. When we selectively remove the most central nodes, however, we see rapid disintegration: indicating the presence of individuals who are acting as important ‘bridges’ across the network. In other words, the network of student interactions is not random: it has structure. 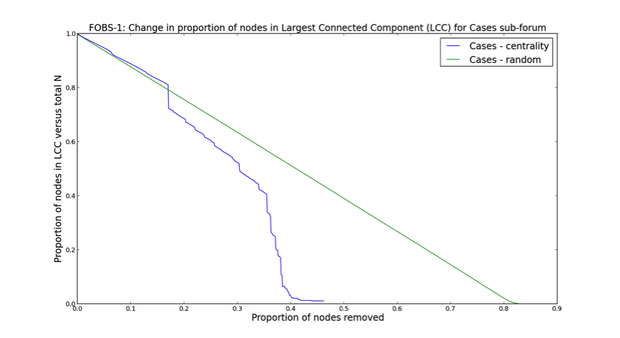 Figure 2. Rapid network degradation results from removal of central nodes (blue). This indicates the presence of individuals acting as ‘bridges’ between sub-groups. Removing these bridges results in rapid degradation of the overall network. Removal of random nodes (green) results in a more gradual degradation.

Of course, the structure of participant interactions will reflect the purpose and design of the particular forum. We can see from Figure 3 that different forums in the courses have different vulnerability thresholds. Forums with high levels of iterative dialogue and knowledge construction — with learners sharing ideas and insights about weekly questions, strategic analyses, or course outcomes — are the least vulnerable to degradation. A relatively high proportion of nodes have to be removed before the network falls apart (rightmost-blue line). Forums where most individuals post once to introduce themselves and then move their discussions to other platforms (such as Facebook) or cease engagement altogether tend to be more vulnerable to degradation (left-most blue line). The different vulnerability thresholds suggest that different topics (and forum functions) promote different levels of forum engagement. Certainly, asking students open-ended questions tended to encourage significant discussions, leading to greater engagement and knowledge construction as they read analyses posted by their peers and commented with additional insights or critiques. 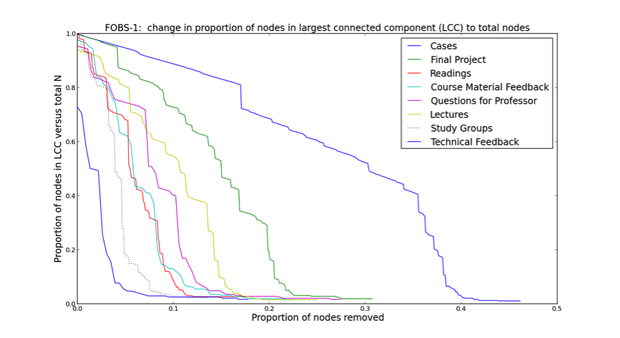 Understanding something about the vulnerability of a communication or interaction network is important, because it will tend to affect how information spreads across it. To investigate this, we simulated an information diffusion model similar to that used to model social contagion. Although simplistic, the SI model (‘susceptible-infected’) is very useful in analyzing topological and temporal effects on networked communication systems. While the model doesn’t account for things like decaying interest over time or peer influence, it allows us to compare the efficiency of different network topologies.

We compared our (real-data) network model with a randomized network in order to see how well information would flow if the community structures we observed in Figure 2 did not exist. Figure 4 shows the number of ‘infected’ (or ‘reached’) nodes over time for both the real (solid lines) and randomized networks (dashed lines). In all the forums, we can see that information actually spreads faster in the randomised networks. This is explained by the existence of local community structures in the real-world networks: networks with dense clusters of nodes (i.e. a clumpy network) will result in slower diffusion than a network with a more even distribution of communication, where participants do not tend to favor discussions with a limited cohort of their peers.

Figure 4 (a) shows the percentage of infected nodes vs. simulation time for different networks. The solid lines show the results for the original network and the dashed lines for the random networks. (b) shows the time it took for a simulated “information packet” to come into contact with half the network’s nodes.

Overall, these results reveal an important characteristic of student discussion in MOOCs: when it comes to significant communication between learners, there are simply too many discussion topics and too much heterogeneity (ie clumpiness) to result in truly global-scale discussion. Instead, most information exchange, and by extension, any knowledge construction in the discussion forums occurs in small, short-lived groups: with information “trapped” in small learner groups. This finding is important as it highlights structural limitations that may impact the ability of MOOCs to facilitate communication amongst learners that look to learn “in the crowd”.

These insights into the communication dynamics motivate a number of important questions about how social learning can be better supported, and facilitated, in MOOCs. They certainly suggest the need to leverage intelligent machine learning algorithms to support the needs of crowd-based learners; for example, in detecting different types of discussion and patterns of engagement during the runtime of a course to help students identify and engage in conversations that promote individualized learning. Without such interventions the current structural limitations of social learning in MOOCs may prevent the realization of a truly global classroom.

The next post addresses qualitative content analysis and how machine-learning community detection schemes can be used to infer latent learner communities from the content of forum posts.

Rebecca Eynon holds a joint academic post between the Oxford Internet Institute (OII) and the Department of Education at the University of Oxford. Her research focuses on education, learning and inequalities, and she has carried out projects in a range of settings (higher education, schools and the home) and life stages (childhood, adolescence and late adulthood).