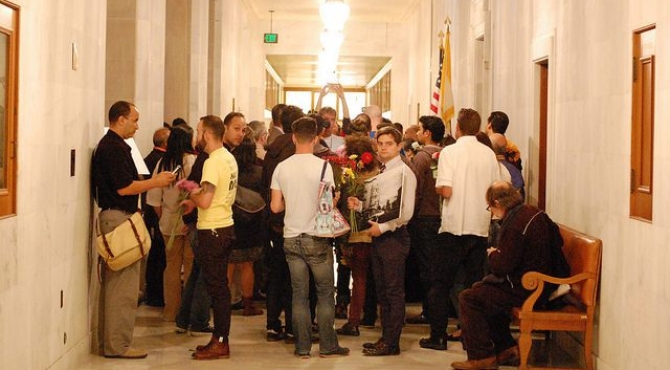 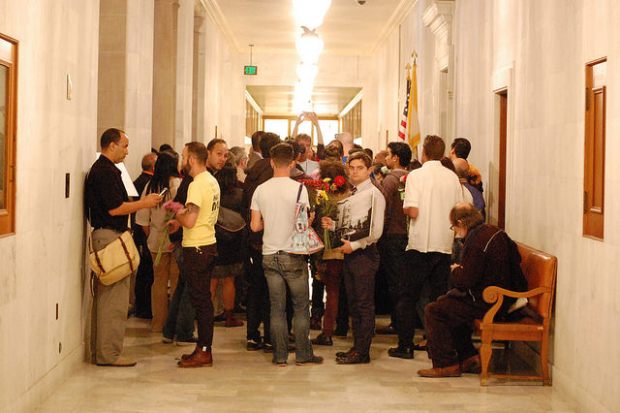 The “Airbnb Law” was signed by Mayor Ed Lee in October 2014 at San Francisco City Hall, legalizing short-term rentals in SF with many conditions. Image of protesters by Kevin Krejci (Flickr).

Ride-hailing app Uber is close to replacing government-licensed taxis in some cities, while Airbnb’s accommodation rental platform has become a serious competitor to government-regulated hotel markets. Many other apps and platforms are trying to do the same in other sectors of the economy. In my previous post, I argued that platforms can be viewed in social science terms as economic institutions that provide infrastructures necessary for markets to thrive. I explained how the natural selection theory of institutional change suggests that people are migrating from state institutions to these new code-based institutions because they provide a more efficient environment for doing business. In this article, I will discuss some of the problems with this theory, and outline a more nuanced theory of institutional change that suggests that platforms’ effects on society will be complex and influence different people in different ways.

Economic sociologists like Neil Fligstein have pointed out that not everyone is as free to choose the means through which they conduct their trade. For example, if buyers in a market switch to new institutions, sellers may have little choice but to follow, even if the new institutions leave them worse off than the old ones did. Even if taxi drivers don’t like Uber’s rules, they may find that there is little business to be had outside the platform, and switch anyway. In the end, the choice of institutions can boil down to power. Economists have shown that even a small group of participants with enough market power — like corporate buyers — may be able to force a whole market to tip in favour of particular institutions. Uber offers a special solution for corporate clients, though I don’t know if this has played any part in the platform’s success.

Even when everyone participates in an institutional arrangement willingly, we still can’t assume that it will contribute to the social good. Cambridge economic historian Sheilagh Ogilvie has pointed out that an institution that is efficient for everyone who participates in it can still be inefficient for society as a whole if it affects third parties. For example, when Airbnb is used to turn an ordinary flat into a hotel room, it can cause nuisance to neighbours in the form of noise, traffic, and guests unfamiliar with the local rules. The convenience and low cost of doing business through the platform is achieved in part at others’ expense. In the worst case, a platform can make society not more but less efficient — by creating a ‘free rider economy’.

In general, social scientists recognize that different people and groups in society often have conflicting interests in how economic institutions are shaped. These interests are reconciled — if they are reconciled — through political institutions. Many social scientists thus look not so much at efficiencies but at political institutions to understand why economic institutions are shaped the way they are. For example, a democratic local government in principle represents the interests of its citizens, through political institutions such as council elections and public consultations. Local governments consequently try to strike a balance between the conflicting interests of hoteliers and their neighbours, by limiting hotel business to certain zones. In contrast, Airbnb as a for-profit business must cater to the interests of its customers, the would-be hoteliers and their guests. It has no mechanism, and more importantly, no mandate, to address on an equal footing the interests of third parties like customers’ neighbours. Perhaps because of this, 74% of Airbnb’s properties are not in the main hotel districts, but in ordinary residential blocks.

That said, governments have their own challenges in producing fair and efficient economic institutions. Not least among these is the fact that government regulators are at a risk of capture by incumbent market participants, or at the very least they face the innovator’s dilemma: it is easier to craft rules that benefit the incumbents than rules that provide great but uncertain benefits to future market participants. For example, cities around the world operate taxi licensing systems, where only strictly limited numbers of license owners are allowed to operate taxicabs. Whatever benefits this system offers to customers in terms of quality assurance, among its biggest beneficiaries are the license owners, and among its losers the would-be drivers who are excluded from the market. Institutional insiders and outsiders have conflicting interests, and government political institutions are often such that it is easier for it to side with the insiders.

Against this background, platforms appear almost as radical reformers that provide market access to those whom the establishment has denied it. For example, Uber recently announced that it aims to create one million jobs for women by 2020, a bold pledge in the male-dominated transport industry, and one that would likely not be possible if it adhered to government licensing requirements, as most licenses are owned by men. Having said that, Uber’s definition of a ‘job’ is something much more precarious and entrepreneurial than the conventional definition. My point here is not to side with either Uber or the licensing system, but to show that their social implications are very different. Both possess at least some flaws as well as redeeming qualities, many of which can be traced back to their political institutions and whom they represent.

What kind of new economic institutions are platform developers creating? How efficient are they? What other consequences, including unintended ones, do they have and to whom? Whose interests are they geared to represent — capital vs. labour, consumer vs. producer, Silicon Valley vs. local business, incumbent vs. marginalized? These are the questions that policy makers, journalists, and social scientists ought to be asking at this moment of transformation in our economic institutions. Instead of being forced to choose one or the other between established institutions and platforms as they currently are, I hope that we will be able to discover ways to take what is good in both, and create infrastructure for an economy that is as fair and inclusive as it is efficient and innovative.